The UCL Institute of Neurology held an open evening on the 15th September 2014 to celebrate and share information about the Leonard Wolfson Experimental Neurology Centre (LWENC) Programme and its Clinical Facility with the UCL research community, UCLP, external academics and industry partners.

Professor Nick Fox, Director of the Dementia Research Centre and a Wolfson Principal Investigator, opened the evening by describing the background to the Wolfson Programme and the facilities that are available to clinical investigators as a result of the extraordinary £20 million award to UCL in 2011 from the Wolfson Foundation.

Part of the award has been used to establish the LWENC Clinical Facility, a unique initiative giving clinical investigators the opportunity to conduct high quality studies, including interventional clinical trials at the Clinical Facility. Professor Fox described the challenges of tackling neurodegeneration, stating that dementia is a 'demographic time-bomb' with the startling statistic of more than one million people in the UK expected to be affected by 2025. Dr Vincenzo Libri, Head of the LWENC Clinical Facility, went on describe the state-of-the-art Clinical Facility that opened to patient activity in March 2014, explaining that the Facility can undertake commercial and UCL sponsored studies, prioritised by a Protocol Review Board (PRB).

Dr Libri explained that the remit of Facility was to support and facilitate experimental medicine and early phase clinical trials (including First-in-Man) in neurodegenerative diseases, and that a comprehensive team consisting of medical, nursing, coordination and governance staff were on board to provide expert advice to investigators running their studies through the LWENC Clinical Facility.

The lecture was concluded by a series of short talks in which perspectives from UCLH, UCL Institute of Neurology, and the Faculty of Brain Sciences by Neil Griffiths, Professor Mike Hanna and Professor Alan Thompson were respectively shared. UCL President and Provost, Professor Michael Arthur provided concluding remarks and highlighted the importance of research conducted within the LWENC and the significance of philanthropic support to propel innovative research. 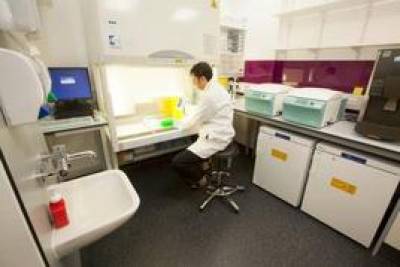 The event was attended by more than 100 internal and external delegates from UCL Institute of Neurology, UCLH, the NIHR, Lancet Neurology, Quintiles, Alzheimer's Society and others.

Fast facts about the LWENC:

To speak to someone from the LWENC Clinical Facility for more information please contact: