Queen Square: A History of the National Hospital and its Institute of Neurology

A history of Queen Square from 1860 to 1997, authored by Simon Shorvon, Alastair Compston, Andrew Lees, Michael Clark, and Martin Rossor.

The National Hospital for the Relief and Cure of Paralysis and Epilepsy, as it was first officially named, was founded in November 1859, and opened in 1860 as the first specialist neurological hospital in the world. It quickly gained a reputation as the ‘mecca of neurology’ and soon became a place of pilgrimage for neurologists from many countries. 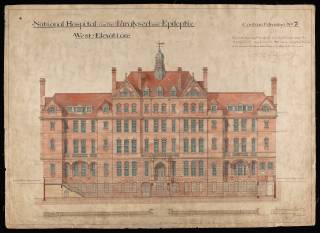 Queen Square: A History of the National Hospital and its Institute of Neurology celebrates its fluctuating fortunes, and engrossing history, from foundation to its eventual amalgamation with University College London Hospital (UCLH) in 1996, and the absorption of the Institute of Neurology into University College London (UCL) in 1997. The book is over 550 pages in length and includes over 120 photos and images, along with biographies of many deceased former members of staff.

The objective of the authors (Simon Shorvon, Alastair Compston, Andrew Lees, Michael Clark, and Martin Rossor) is to place the story of the hospital within the wider contexts of British social history and the development of British neurology in the modern age. A broadly chronological approach has been adopted in the narrative, divided into three distinctive periods; 1859–1902, 1903–45 and 1946–97. The authors also revisit certain themes throughout the book to show that these have on repeated occasions influenced the course of the history of the hospital and its reciprocal engagement with the wider national and international community.

The book will be the definitive history of Queen Square, and will be of undoubted interest to Alumni.

The authors outline ten of these prominent themes in the hospital’s history in the introduction, namely:

The Tripartite Role of the National Hospital: The provision of a clinical service, research, and training have been the three fundamental roles of the hospital. Their relative importance changed over time and, in fact, over-neglect of or over-focus on one or another injured the hospital’s prospects at various points in its historical trajectory.

The Struggle to Maintain Independence: The hospital was, until 1948, a ‘voluntary’ – i.e. a charitable foundation with independent governance. However, it became increasingly reliant financially on the state in the twentieth century as social mores and conditions changed, causing friction and argument. Even after incorporation into the NHS in 1948, it often attempted solo performances, and its ambitions for retaining independence and self-governance within a centralised system caused continued difficulties.

Recurring Financial Problems: As a voluntary hospital, income was initially entirely philanthropic. By the end of the nineteenth century, this source of funding was proving inadequate, and financial crises dogged the hospital throughout the early twentieth century.

Despite initial hopes, the crises continued after incorporation into the NHS, when the hospital’s finances became intimately bound up with national policy and fortune.

The Context of British Social and Political History: The hospital’s role and position have been determined to a large extent by the social and political course of the country. Although often overlooked internally, these forces frequently trumped any attempt at autonomy and proved impossible to resist.

The Importance of Individual Members of the Consultant Staff: The reputation of the hospital to a great extent depended on the quality of the clinical and academic work of individuals on its consultant staff. The consultant body’s power over, and influence on, hospital policy have been important ingredients in the hospital’s success. This influence was predominant in the first 100 years but progressively weakened in the later twentieth century. Strikingly, too, the consultant body was small and highly selected, at least until recent times, and this conferred an elite status.

Academic Contribution to Neurology: An enduring legacy of the hospital has been the written contributions of its staff to the practice and scientific basis of clinical neurology and related disciplines, and the evolution of the hospital’s clinical method.

Maintaining Dominance in Neurology and Queen Square’s position within the wider context of British neurology:

The hospital aspired to prominence and dominance nationally and internationally throughout its history. By monopolising national teaching and professional policy-making bodies, its staff worked to maintain an elite position that did not always make for friendships but, by any objective analysis, was never seriously challenged.

Specialism and the Relationship of Neurology to General Medicine and Psychiatry: The National Hospital led in developing specialism and, later, subspecialisation of neurology in Britain, and this became the single most important justification for its existence as an independent hospital. As neurology specialised and became divided along disease lines into subspecialties, its relationship with general (internal) medicine and psychiatry became difficult. Ultimately there were differences in policy which could not be resolved. Throughout the twentieth century the difficult personal relationships between neurologists and physicians and psychiatrists contributed to a schism between the disciplines.

The Relationship of Neurology to Neurosurgery: The attitude of the hospital physicians to neurosurgery, after the death of Victor Horsley, resulted in loss of leadership in the subject, at least for a while. This threatened the hospital’s position when, stimulated by events in the Second World War, neurosurgery led the development of services outside London, and neurology followed. In more recent times, neurosurgery has grown at the expense of neurology – clinically, if not academically – and the relationship between the disciplines remains uncertain.

The Estate and Lack of Space: The limitations of space in Queen Square have been an important factor in determining the course of the hospital. Much management time and effort were expended on property and estate development. The Queen Square ‘brand’ has always been dependent on its location, and repeated proposals to move the hospital or its Institute fortunately failed once the co-location of the National Hospital and its Institute in Queen Square, central to its success, had been recognised.

Queen Square: A History of the National Hospital and its Institute of Neurology will be available to purchase online with all proceeds of sales going to the National Brain Appeal.

Postscript: The book was launched on 20th November 2018 in Queen Square Library - please see photos on the Library website