Improving the retention of minority ethnic teachers in England

Despite the ongoing policy commitment to diversification of the teaching workforce (DfE, 2018a), a gap persists between the proportion of students and teachers from minority ethnic groups in England. 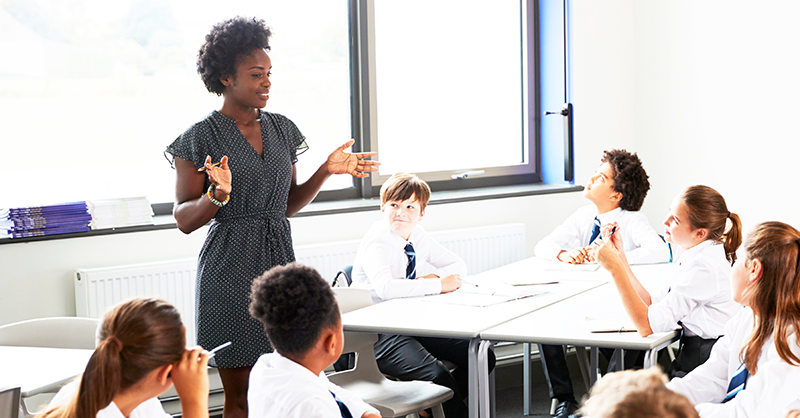 Figures from 2019 show that 85.6% of all teachers and 65.4% of pupils are currently from a White British background; in comparison, 78.5% of the working age population of England were recorded as White British in the 2011 census (UK Government, 2020).

Yet, there has been little empirical investigation of how the ethnic character of the English teaching workforce has changed over time, where minority ethnic teachers tend to be employed, and what happens to these teachers once they are employed that causes lower retention.

Our study ‘Retention of teachers from minority ethnic groups in disadvantaged schools’ used the 2018 School Workforce Census and related administrative school census datasets to explore the patterns of employment of non-White British teachers (c. 65,600) across all state-funded English schools.

To explore factors shaping teachers’ decisions to stay in or leave teaching, we conducted 24 interviews with teachers from different ethnic backgrounds, including 14 Black teachers, 2 mixed White and Black heritage teachers and 8 teachers from different Asian backgrounds. Thirteen of these teachers were in the profession for over five years and nine for five or less years. Nine participants worked in primary and 15 in secondary schools, all of which were urban diverse schools.

These type of schools tend to have higher proportions of minority ethnic or disadvantaged pupils and experience higher rates of teacher turnover.

The analysis of census data found that teachers from minority ethnic groups are concentrated in London schools and in ethnically diverse schools. This pattern of employment has implications for their retention.

Finally, more minority ethnic teachers work in those London schools that have a higher proportion of pupils eligible for free school meals and those located in deprived areas.

Having identified this concentration of minority ethnic teachers in diverse urban schools, we recommend that government resources and support are targeted at improving the retention of these teachers. Improving retention will help to manage teacher supply in urban schools which struggle to fill teaching posts, and reduce the negative impact of high staff turnover on the outcomes of disadvantaged children and children from non-dominant cultural and ethnic backgrounds.

The interviews suggest that teachers from minority ethnic groups are motivated to teach in urban diverse schools, but the ethnic diversity of senior leadership teams (SLT) in such schools is important for the retention of minority ethnic teachers.

Minority ethnic teachers value diversity in the workplace and relate to pupils from non-dominant ethnic communities. However, all the teachers we interviewed disapproved of the near universal whiteness of the SLT in otherwise diverse schools. We found that this issue plays a role in teachers’ decisions to move schools because of a perceived negative impact on the organisational culture.

Fair representation which reflects the ethnic diversity of the local community among school leaders should be a core value encouraged in state-funded schools. Ofsted should be required to pay attention to the ‘mix’ of diversity among the pupils, teachers and senior leaders in a school. We note the lack of empirical research using nationally representative data on what happens to minority ethnic teachers once they are employed. Investigating trajectories of individual teachers to determine drivers of minority teachers leaving the profession and moving within the state sector will contribute to informing policies around staffing urban schools with high quality teachers and retaining them. Such analysis will also help explore, and potentially raise, equity concerns with respect to the relegation of these teachers to specific schools. The trends must be examined within specific ethnic subgroups to account for different histories of disadvantage in the minority ethnic population in England.

Retention of teachers from minority ethnic groups in disadvantaged schools.