Several UCL Institute of Education (IOE) academics have been exploring what the future of education across the world will look like at the international Global Education and Skills Forum in Dubai. 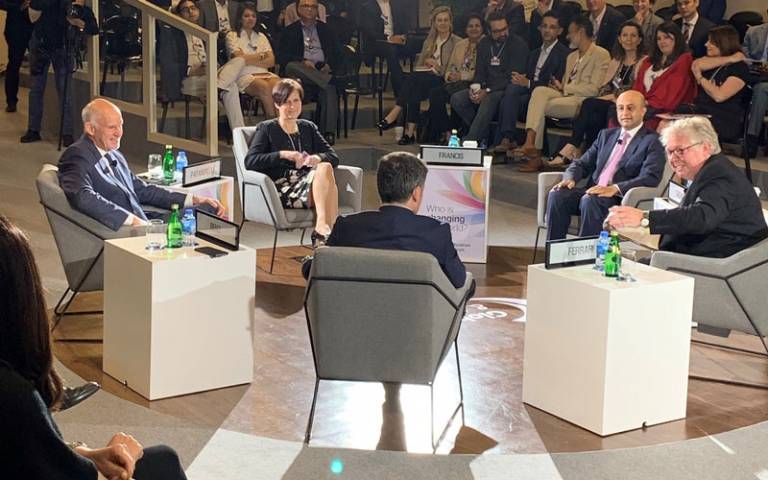 IOE researchers delivered talks and participated in panel discussions at the conference, which was attended by teachers, educationalists and business representatives, among others.

IOE Director Professor Becky Francis was part of a discussion examining the impact the UK leaving the European Union will have on people living in the UK and across the world. Former Italy Prime Minister Matteo Renzi and former Greece Prime Minister George Papandreou were also on the panel.

As well as covering the impact Brexit will have on UK and EU students, the talk focused on the potential political options the UK faces in the coming weeks and months, including holding a second referendum.

Professor Francis argued that social inequalities and the “lack of buy-in” on people’s roles as citizens can be addressed through education, particularly through the equivalent of politics, philosophy and economics (PPE) being offered to pupils through the citizenship curriculum.

Professor Francis and Professor Martin Mills, Director of the IOE’s Centre for Teachers and Teaching Research, also looked at whether schools’ modernisation, or lack of, has led to students becoming disconnected. Exploring whether schools will survive the fourth industrial revolution, they heard from advocates both for and against the traditional model of schooling, addressing issues across the spectrum of mental illness, social injustice and media.

In a separate discussion, Professor Mills, Dr Jane Perryman (Department of Curriculum, Pedagogy and Assessment) and Sam Sims (Department of Learning and Leadership) examined examples across the world of different education systems, what is needed to keep great teachers in classrooms over the long run, the reasons teachers leave, and what can be done to make them stay.
The Global Education and Skills Forum is a platform for collaboration and problem solving, attended by over 1,500 delegates who share debate and shape new ways for education to transform the world. The list of this year’s attendees included 2018 winner of the Global Teacher prize and IOE alumna Andria Zafirakou, former UK Prime Minister Tony Blair, lawyer Cherie Blair and former West Indian cricketer Brian Lara. The Forum is an initiative of the Varkey Foundation.