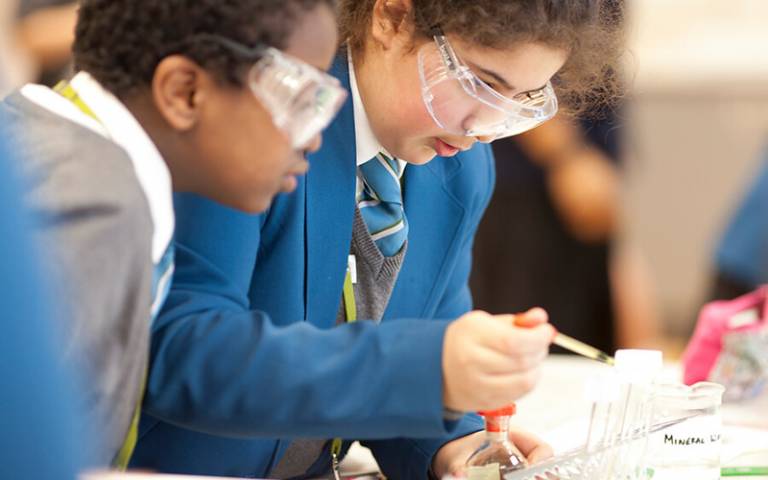 Project Director Professor Louise Archer from the IOE believes that the programme offers new hope to the long-standing, intractable problem of how to better engage more young people from more diverse backgrounds with science.

She explained: "The approach works with any science curriculum. It's not a new set of materials and doesn't mean diluting science concepts. It's a reflective framework through which teachers make small tweaks to re-orientate their lessons to better connect science with the reality of their students' lives and experiences.

"The approach is about broadening what counts as teaching and learning science. It comprises three main pillars: the first, personalising and localising, goes beyond contextualising science, to help students find personal meaning and connection with science. The second pillar involves eliciting and valuing students' experiences, identities and interests in class, linking these to the science content. The third pillar seeks to build the different dimensions of science capital - for instance, a teacher might regularly highlight how what the class are learning can be useful for any career, not just science jobs."

The programme, part of the Enterprising Science Project now based at the IOE, builds on the team's prior research in which they developed the concept of 'Science Capital' -  the science-related resources that someone possesses, such as their science-related attitudes and dispositions, knowledge, interests, behaviours and social contacts. This previous work found that the more Science Capital a student has, the more likely they are to see themselves as a science person and aspire to continue with post-16 science.

Focusing on schools with high proportions of students from socially disadvantaged communities, the Enterprising Science project team worked over four years with 43 secondary science teachers in schools in London, Newcastle, York and Leeds.

The researchers also found that students who were taught using the Science Capital approach expressed more positive views towards science and its relevance to their lives in their post-test surveys. The percentage of students who expressed interest in studying one or more science subjects at A Level rose from 16% to 21.4%.

Students also reported increased regular engagement with science outside of school - particularly in relation to going online to look up things about science and talking with others about science.

Deputy Director of the project, Dr Heather King from Kings College London, said: "Our findings show that students and teachers benefited from the approach. In particular it improved students' understanding of science concepts and content, as they found science more relevant to their lives".

Teachers also agreed that using the approach increased student engagement with science, led to better understanding and improved behaviour. As one teacher explained: "What I've noticed is when I use the approach, I can see it in their eyes...like meerkats, they pop up and you can see the engagement". Another reflected: "More students get more work done and there's less disruption. There's more interest".

Copies of the handbook detailing the approach and linked resources (e.g. animations and a film featuring teachers talking about their experience of using the approach) will be free to access from 13 October.