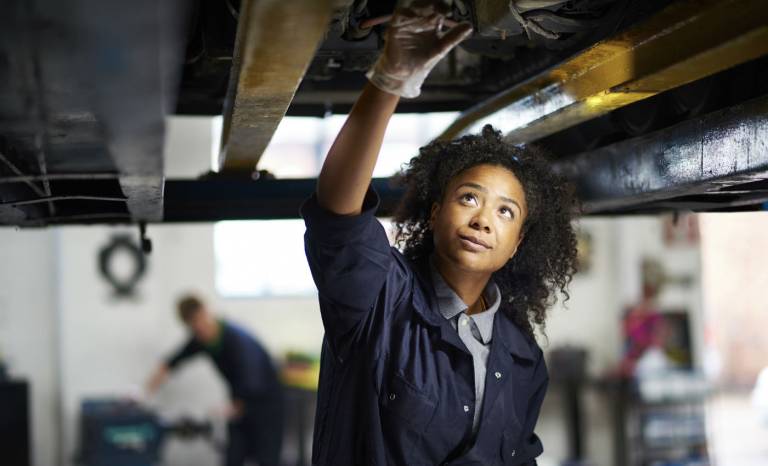 Twenty-somethings who pursued vocational training rather than university report being just as satisfied with their lives, according to new research.

Researchers from the UCL Institute of Education and the London School of Hygiene & Tropical Medicine examined information on more than 9,500 young people living in England, who were born in 1989-90 and are being followed by a study called Next Steps. They found that there was no 'right way' to transition into adult life. Instead, young people followed a range of viable paths after completing compulsory schooling at age 16.

Forty-five per cent of young people went into higher education, and a similar proportion - 42 per cent - entered the labour market.

Just over a third moved quickly into work after finishing school, with some continuing their studies for a limited period of time before doing so. Roughly 6 per cent pursued vocational training before getting a job.

At age 20, the young people were asked how satisfied they were with how their lives had turned out so far. There were no significant differences between those at university, those in apprenticeships or those in work.

Nearly 13 per cent of young people spent prolonged periods of time not in education, employment or training (NEET) after they finished school. They were the least satisfied with their lives at age 20.

The authors suggested that work may offer an opportunity to feel valued, to belong and to make a contribution for young people who do not go to university. However, if young people struggle to find meaningful and challenging work, it can be detrimental to their wellbeing.

Young people's paths took a different turn if they faced multiple socioeconomic risks, including growing up in a family where the parents had little education, the gross household income was less than £10,400 per year, or where none of the parents were working.

At age 14, young people facing the most risks had slightly lower expectations of going to university, and less confidence in their academic ability than their more privileged peers. They also tended to be less engaged with school at this age.

By the time they finished school, young people from disadvantaged families were more likely than their better-off peers to go straight into work, or to end up being NEET. Moreover, living in a deprived neighbourhood increased the likelihood of going into vocational training instead of higher education.

Interestingly, disadvantaged young people were at higher risk of being NEET if they felt they were very academically able. This was true regardless of how well they had actually done at school. The authors suggested this might point to a 'dark' side of high self-confidence for young people who struggle to overcome the constraints of their upbringing.

Disadvantaged young people who had expected to apply to university tended to stay on at school at least for a short period of time after age 16, before ultimately going into work. The authors suggested that despite the young people's academic aspirations, the pressure of their circumstances may have compelled them to get a job before pursuing a degree.

"It is encouraging that young people who find a viable career path after leaving school are just as happy with their lives regardless of whether they go on to university, an apprenticeship or work. This suggests there isn't just one way to successfully transition into adulthood," said Professor Ingrid Schoon, the study's lead author.

"We must make sure that there are equal opportunities for young people who do not pursue higher education immediately after completing secondary education - this includes good quality vocational training and local labour market opportunities, particularly in the most deprived neighbourhoods."

'A socio-ecological model of agency: the role of structure and agency in shaping education and employment transitions in England' by Ingrid Schoon and Mark Lyons-Amos will be published in Longitudinal and Life Course Studies on 26 January 2017. Embargoed copies of the paper are available to journalists upon request.