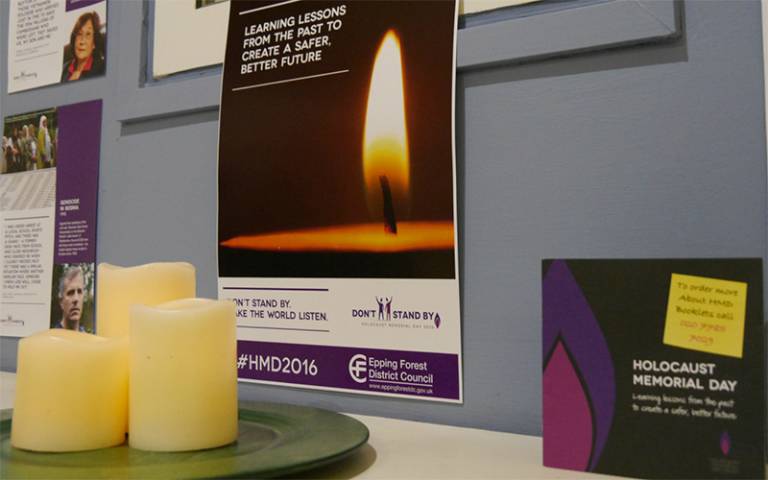 This year the UCL Centre for Holocaust Education will be joined by Holocaust survivor Mala Tribich and Sir Keir Starmer, MP for St Pancras and Holborn, in a small candle-lighting ceremony to mark Holocaust Memorial Day. This commemorative ceremony will take place at the London Knowledge Lab, Emerald Street, at 10.55am.

We will remember the millions of Jews killed in the Holocaust and all victims of Nazi persecution.

As a young girl living in Poland, following the Nazi invasion in 1939, Mala experienced many personal tragedies during the Holocaust. Her mother and sister were murdered and all remaining family members deported to concentration camps. Her only relative to survive was her brother Ben.

Whilst still a child, Mala lived and was enslaved to work in unimaginable conditions in a Jewish ghetto and within concentration camps and survived a life-threatening illness during her time at Bergen-Belsen. Over the past 20 years, Mala has chosen to share her story with school children around the country. Each time recounting her painful and emotionally draining experiences to help preserve the memory of the millions of Jewish victims who perished during the Holocaust who have no-one to remember for them.

Mala believes strongly that continuing with education about the Holocaust is essential to ensuring the horrific experiences of this period of history are never forgotten.

Leon Greenman, an English man from East London living in the Netherlands, was deported with his Dutch wife Else and their young son Barney to Auschwitz-Birkenau. Tragically, Leon's wife and son did not survive. On return to England following the liberation of the Buchenwald camp where Leon was by then being held, he went on to fulfil a promise he made during his time there:

"While in the concentration camp I made a promise to God that if I survive I would live to tell the world what took place here."

True to his word, Leon spent the rest of his life speaking to thousands of school children and others about his experiences during the Holocaust. In his 80s Leon's work in the struggle against far right extremists in the UK led to death threats and attacks from them on his home.

"…after 50 years [and] after saving myself and getting out of the camps, the Nazis still want to kill me".

The Centre is committed to equipping teachers with the story of Leon and other survivors who 'didn't stand by' through our world renowned, research-informed CPD and teaching resources. We are leading the way in helping young people to understand how, not long ago, not far from where we live, millions of people became complicit in the murder of their neighbours.

What is more important in education than understanding how this was possible?