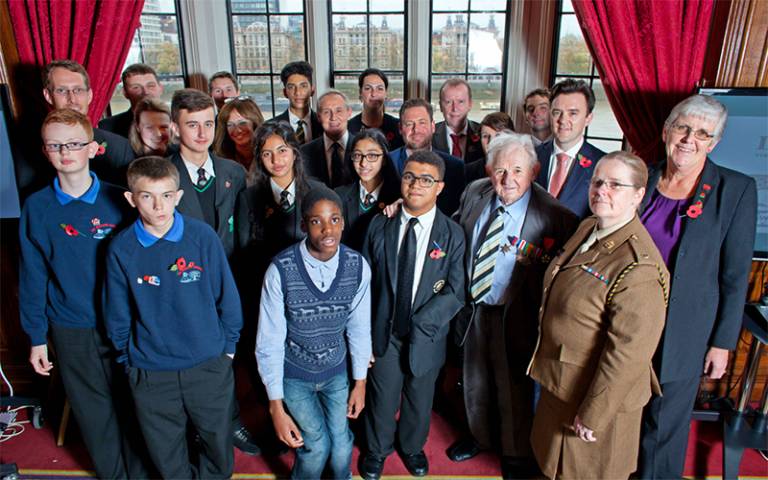 The UCL Institute of Education (IOE)'s First World War Centenary Battlefields Tour Programme together with its travel partners Equity Inspiring Learning were awarded 'Education Partnership of the Year' at the EducationInvestor magazine awards in London this week.

The partnership's five year project, which runs until 2019, is funded by the Department for Education (DfE) and the Department for Communities and Local Government (DCLG).  It offers every secondary school in England the opportunity to send two pupils and one teacher to the Western Front to allow them to develop a deeper understanding of the First World War.

Professor Stuart Foster, Director of the First World War Centenary Battlefields Tour Programme, said:
"I'm delighted that UCL Institute of Education and Equity Inspiring Learning have won the prize for Education Partnership of the Year. The team has worked hard to develop an innovative and engaging First World War education programme, and this award reflects the success we have had in ensuring that the significance, impact and legacy of the First World War is more profoundly understood in schools and communities across the country".

Last week, the programme also hosted an event at the House of Lords, sponsored by Communities Minister Baroness Williams, as part of its Legacy 110 initiative. This celebrated the contribution the participating pupils have made in creating an enduring legacy for the First World War through post-tour projects in their local communities.

Four schools were invited to showcase some of the most innovative and inspiring projects. These include a song 'My Mate George' written and recorded by pupils from Tottenham Vale Special School, which was inspired by the story of a local WW1 soldier whose journey they traced.

Among the other winners were Cardinal Newman Catholic School and Community College in Coventry who created a 'Peace Prayer Garden' following their tour.  This is used by the school and local community to commemorate those who fought and died in the conflicts as well as staff and students of the school who have passed away.

Baroness Williams said:
"People of all backgrounds and faiths fought for Britain during the war. Now pupils from every school across the country will see at first hand the enormous sacrifice that they made for our country.

"The First World War is as important today as it was a century ago and the pupils from the 1,140 schools who have taken part in the programme so far are vital to keeping all of our shared history alive for the next generation."

In the order in which they appear (left to right):