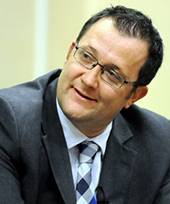 Vic Goddard is proud to be a council estate boy from South London but suffers the curse of therefore being a Crystal Palace Fan; if you caught any of 'Educating Essex' he was probably the one crying.

Vic, from a young age, wanted to be a PE teacher and following his degree course in Chichester enjoyed two years working on the south coast at Angmering School, learning from two of the best PE teachers you could ever wish to meet. During this time Vic realised that he wanted to be a headteacher and set himself the target of being a Head by 40 and on the golf course by 50! This led to him moving on from jobs - sad to leave but determined to make the next career step. Four years in Cheam followed by a three year stint working in an international school in Cairo followed where he took on the role of Head of Faculty.

On returning to the UK, Vic was fortunate to work with a truly inspiring headteacher, Kevin Sadler in his first SLT role and in five years went from Assistant Head to Head at Passmores School (now Academy) in Harlow. Vic feels privileged to be a headteacher and is humbled everyday that parents/carers are willing to trust him to educate their children.