Dominic Wyse is Professor of Early Childhood and Primary Education. 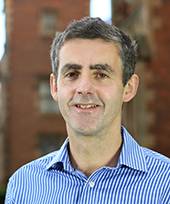 The main focus of Dominic’s research is curriculum and pedagogy. His research has contributed to understanding of the pedagogy of writing, reading and literacy, for example in his book How Writing Works: From the Invention of the Alphabet to the Rise of Social Media. Dominic has extensive experience of working at the interface of research, policy and practice, e.g. see Experimental trials and ‘what works?’ in education: The case of grammar for writing published in the British Educational Research Journal (BERJ). He recently led the BERA Close-to-Practice research project, and the BERA SAGE Handbook of Educational Research. Bestselling books for students, teachers and educators include Teaching English, Language and Literacy.

Dominic Wyse is Founding Director of the Helen Hamlyn Centre for Pedagogy (0-11). He is a Fellow of the Academy of Social Sciences (FAcSS), was Vice-President then President (2019-21) of the British Educational Research Association (BERA), and a fellow of the Royal Society for the encouragement of Arts, Manufactures and Commerce (RSA).

Prior to his current role, Dominic has also served as Head of the Department of Learning and Leadership at the IOE, and Faculty Director of Research, Consultancy and Knowledge Transfer, in the Faculty of Children and Learning. Before joining the IOE, Dominic was a Senior Lecturer at the University of Cambridge. He was also appointed as the first Director of Music-Making at Churchill College Cambridge, where he was also a Fellow and Director of Studies for Education. Dominic’s expertise in music began with his undergraduate studies at The Royal Academy of Music. In the past Dominic was a Reader at Liverpool John Moores University, and a teacher with experience working in London, Bradford and Huddersfield in infant and junior phases.

The wide range of his work includes consultancy for major international companies and advice to governments. His consultancy work has included acting as an expert witness in legal cases. He has been invited to give evidence to House of Commons inquiries (most recently to the inquiry into assessment in primary schools), and he has been an invited expert featuring in media including BBC Newsnight, BBC Radio Four Today, the Times Educational Supplement, the Guardian and the Times.