Soft Robotics in Healthcare: Challenges in Design and Control

On 12 May we hosted our 7th WEISS symposium, this one around the theme of soft robotics for healthcare. 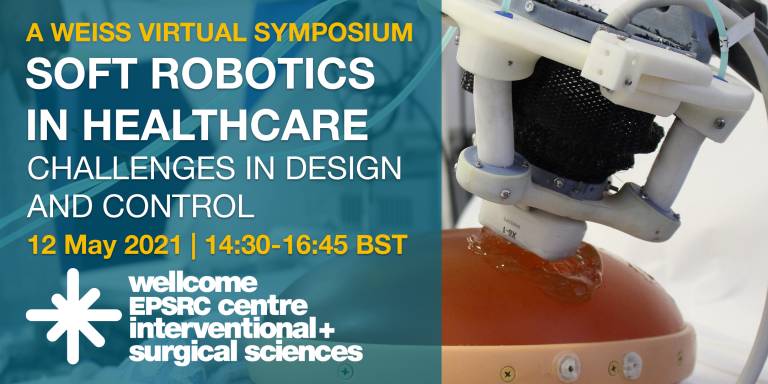 Soft Robotics is a fast-emerging field and soft robotics systems are increasingly being applied to real-world situations. However, there are still various challenges that need to be addressed to make soft robots more viable, particularly in a clinical setting. These challenges relate to both the design of soft robots – ensuring devices that are easily manufacturable and behave in a controllable manner - as well as challenges associated with control strategies for soft robots that are in complex interaction with their environment.

In this symposium, organised by Lukas Lindenroth and Agostino Stilli, world-leading researchers in the field presented their work and demonstrated how soft robotics could open new avenues into healthcare technologies. You can watch the recording of the symposium below:

The symposium opened with Dr Moritz Bächer, Head of Computational Design and Manufacturing at Disney Research.

He discussed and demonstrated the benefits of using differentiable simulation to address optimization problems when designing and controlling soft robots. (Mortiz’s talk was unable to be recorded, however here is a recent paper that describes some of his work).

Dr Christian Duriez, Research director at INRIA, France, spoke about unified modelling of soft robots and soft tissues using the SOFA framework. Soft robots and soft tissues have similar properties such as high compliance and formations with large displacements which means that similar numerical models can be used. You can see Christian’s talk from 5:54. His colleagues Eulalie Coevoet and Stefan Escaida Navarro were also present at the symposium to answer questions from the audience.

Dr Egidio Falotico (Scuola Superiore Sant’Anna, Italy) gave his presentation on learning-based controllers for soft continuum robots. Continuum robots are used in several applications however present a particular challenge when it comes to control due to their hyper-redundant structures and difficulties when it comes to modelling due to under-actuation which machine learning could address. You can see Egidio’s talk from 30:32.

Dr Sheila Russo (Boston University, US) discussed soft robots for advances in interventional endoscopy - using soft, multiscale robotics systems to help tackle some of the challenges faced when performing minimally invasive procedures (such as needing to make an incision) and therefore helping to improve outcomes and recovery times for patients. Watch Sheila’s talk from 53:45.

Dr George Mylonas and Dr James Avery (both Imperial College London) gave a joint talk titled ‘Soft medial robots: necessity, not hype’. George gave insights into a deployable, cable driven parallel manipulator for robotic control of endoscopic instruments which aims to mitigate some of the challenges posed by tendon driven continuum robots (such as limited traction forces and poor controllability). James demonstrated his work on electrical impedance tomography to perform sensing in soft robots. You can see their talk from 1:22:05.

The final talk was given by Dr Tommaso Ranzani (Boston University, US) who talked about developing complex multi-scale soft biomedical devices for advanced minimally invasive interventions. He also touched on some of the challenges involved in increasing the complexity of miniature soft robots. You can see Tommaso’s talk from 1:48:35.

The symposium attracted 61 attendees from 17 different countries, which brings the total number of attendees of our WEISS symposia to almost 1200! Registration is now open for our next symposium on 17 June 2021 titled 'Human Factors Interventions for Surgical Systems' - register now!