We recently invited Year 8 students to participate in an outreach event at WEISS in Charles Bell House, led by Daniil Nikitichev who is a senior research associate at WEISS. The event provided an opportunity for the young students to learn about the work currently being undertaken at WEISS and to explore some key projects in surgical research, in particular those that have been undertaken by Daniil and his team.

The students were split in to three groups to visit each of the stations located in different laboratories. Each session lasted around 15minutes, demonstrations that were carried out by Daniil and his team covered the following topics;

GIFT-SURG - Displaying the work behind low-risk imaging tools and techniques that can be used before and during surgery for diagnosis, treatment and therapy on unborn babies with severe birth defects.

Ultrasound Imaging - Where the students were shown an ultra-sound machine with a demo on how to operate the machine as well as hearing about the benefits of ultrasound and its advantages for scanning soft tissue, more commonly used to study developing fetus and to pick up on any potential complications during pregnancy.

Photo-acoustic Ultrasound - The students were told about the non-invasive biomedical imaging based upon the use of laser-generated acoustic waves for visualising the internal structure and function of soft tissues. They were shown a prototype demo of how this works and taught how the technology offers a whole new spectrum of information more quickly and easily, which was then followed by a question and answer session.

The students were then tasked with a trial of simulated keyhole surgery using a model box containing incision markings, where they had to source and remove the makeshift tumours using a microscopic camera and surgical claws - providing an insight to what keyhole surgery is and the methodology around performing this type of surgery. 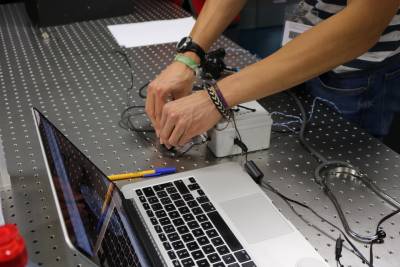 Having been explained that WEISS research areas are constantly working towards creating smaller and safer operative technology and methods, the students were then asked to come up with their own unique ideas that could potentially solve a surgical challenge which they presented in poster format - where they presented some impressive and innovative thinking.

The event concluded with a presentation from Daniil, talking the students through a timeline of his career which led him to research at UCL as well as touching on his most recent research project of 3D printing and looking at some the advantages and disadvantages of the three dimensional digital design.

An inspiring event with impressive insights from the young students, we look forward to welcoming more schools in the future!

" WEISS provides an exciting opportunity to advance innovative biomedical engineering research at UCL and to deliver effective interventions that will have real patient benefit. The cutting-edge interdisciplinary facilities at Charles Bell House allow us to work alongside colleagues in surgery and radiology to accelerate our impact." Professor David Hawkes, Director of WEISS