Timothy's research focuses on the role of materials within Orthodox Christianity. He has worked mostly with Antiochian Orthodox and Greek Orthodox, though is interested in the wider array of local Churches, including both 'Eastern' and 'Oriental' Orthodox. Previous research focused on the use of textiles (such as priestly vestments), icons, and ritual substances (e.g. holy water and oil) within the creative production of Orthodox Christians as art-like subjects. This approach to religious formation draws heavily on the anthropology of art and ethical formation, in dialogue with indigenous notions of sacred art and the 'image and likeness' of the person. Developing further the connection between the body and religious transformation, Timothy’s British Academy Postdoctoral Fellowship explored issues around end-of-life and post-mortem care amongst Orthodox Christians. His new research, funded by the UKRI, examines the hermeneutics of the ‘material ecology’, and the way the properties and affordances of material – especially the body, land and the environment – influence the discursive traditions of global religions. This research works across a broad range of case studies related to the body, land and environment including social, political, medical and ecological/conservation contexts.

Timothy is also an Associate Scholar attached to the ERC-funded ETHNO-ISS project, which is conducting research on the scientific project of space exploration, specifically in relation to the International Space Station (ISS) and the earth-based command centres. Timothy’s interest within the project focuses on the notions of transcendence and the discourse, especially in the Russian context, between scientific progress and discovery, and theological conceptions and religious practices – both in the official discourse of Russian Orthodox Christianity and in the folk and un-orthodox expressions seen throughout the Soviet and Russian space exploration. 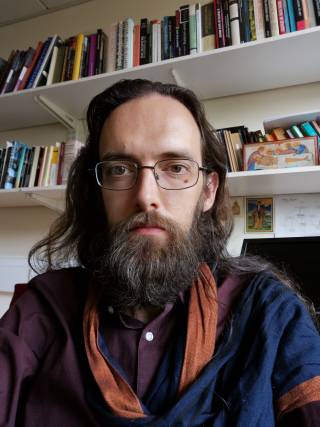