VIRTUAL IAS Festival: What can a planet do? Planetary social thought & more-than-organic life 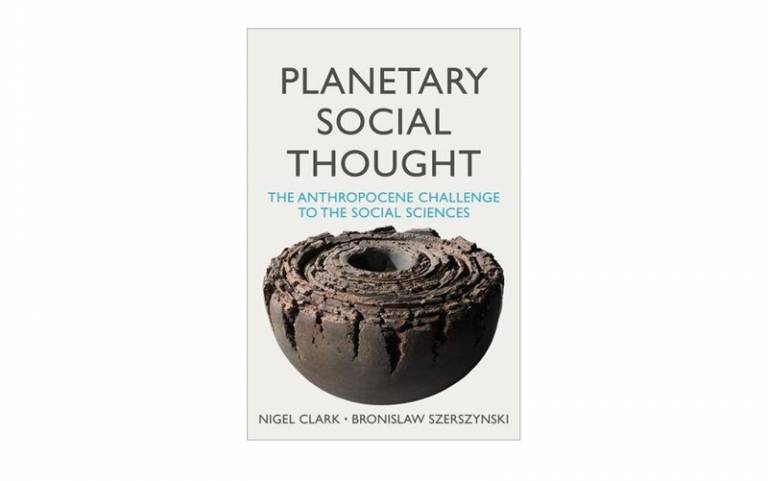 COSS is excited to host professors Bronislaw Szerszynski and Nigel Clark who will ask ‘What can a planet do?’ in their talk regarding the wider questions emanating from their recent book ‘Planetary Social Thought’. With respondents David Jeevendrampillai, Rob La Frenais and Victor Buchli.

COSS is excited to host Professors Bronislaw Szerszynski and Nigel Clark, who will ask ‘What can a planet do?’ in their talk regarding the wider questions emanating from their recent book ‘Planetary Social Thought: The Anthropocene Challenge to the Social Sciences’.

In this talk, we explore how ideas from our new book Planetary Social Thought might help prepare human thought for the encounter with other planets.  In the book we outline a transdisciplinary way of thinking social life with and through the Earth, using the twin concepts of ‘planetary multiplicity’ and ‘earthly multitudes’ to understand the Earth as self-organizing and self-differentiating over all spatial and temporal scales, and to look at the way skilled human collectivities respond to the threats and opportunities presented by planetary self-differentiation. In the talk, we build on these concepts to propose new ways of thinking about what matter might do on other worlds, incorporating what thinkers such as Deleuze, Guattari and Delanda call ‘nonorganic life’ and the ‘machinic phylum’ of solutions accessed by organic and nonorganic entities and assemblages alike.  We start by using some examples from the Earth, showing how thinking about earthly phenomena in a planetary way opens out into questions about other worlds, and then draw on examples from planetary science, astrobiology, science fiction and ongoing interdisciplinary collaborations to talk about ‘what a planet can do’.  We use this to sketch out a more expansive research programme than the conventional search for extraterrestrial ‘life’ or ‘intelligence’.

This event is organised by the Centre for Outer Space Studies, part of the UCL Institute of Advanced Studies.

Nigel Clark is Chair of Human Geography at the Lancaster Environment Centre, Lancaster University. He is the author of Inhuman Nature (2011) and (with Bronislaw Szerszynski) of Planetary Social Thought: The Anthropocene Challenge to the Social Sciences (2021).  He co-edited (with Kathryn Yusoff) the 2017 Theory, Culture & Society special issue on ‘Geosocial Formations and the Anthropocene’. Current interests include pyrogeographies of the explosion, planetary reason and decolonization, and the paleogeography of care.

Bronislaw Szerszynski is Professor of Sociology at Lancaster University.  He is author of Nature, Technology and the Sacred (2005) and (with Nigel Clark) of Planetary Social Thought (2020), and co-editor of Risk, Environment and Modernity (1996), Re-Ordering Nature (2003), Nature Performed (2003) and Technofutures (2015).  His research seeks to situate social life in the longer perspective of human and planetary history, drawing on the social and natural sciences, arts and humanities.  As well as academic publications, his outputs also include performances, art-science exhibitions and events, and experimental participatory workshops.

Director of COSS and Senior Research Fellow on ETHNO-ISS. He researches the curation, narration and use of Earth Imagery from the International Space Station, particularly in relation to the overview effect and the relation to emergent notions of humanity, utopia and the future.

Dr. Rob La Frenais is an independent contemporary art curator, working internationally and creatively with artists entirely on original commissions. He believes in being directly engaged with the artist's working process as far as possible, while actively widening the context within which the artist can work. In 1979 he founded the influential contemporary cultural journal Performance Magazine, which he edited until he be- came a curator in 1987, when he developed a number of new projects with artists like Helen Chadwick, Mona Hatoum, Stelarc, Cornelia Parker, Guillermo Gomez-Pena and Coco Fusco and Marina Abramovic. From 1997-2014 he was curator of the Arts Catalyst, the science-art organisation, where among other things he organised zero-gravity flights for artists such as The Otolith Group and curated ‘Republic of the Moon on London’s South Bank in 2014. Since 2014 he has independently curated exhibitions internationally including the site-specific 'Exoplanet Lot' in the Lot Valley, France, Tomas Saraceno’s ‘Aerocene' in White Sands Desert, New Mexico, and the large-scale 'No Such Thing as Gravity' at FACT, Liverpool and the National Taiwan Museum of Fine Art. He organised the conferences ‘Earth Lab’ at Westminster University in 2017 and ‘Art After the Collapse’ for Dartington Arts School in 2019. He was a Fellow at the Saari Residence, Turku, Finland, where, after rethinking his trajectory he is now taking part in artistic collaborations  and making performances. In August 2020 he led and mentored undergraduate students for Srishti Institute, Bangalore, India as part of his Future of Transportation project. In October 2020 he delivered an online keynote with Saraceno for UNAM, México City. He is currently working on the book ‘Mirroring the Moon’ which aims to compile all the art currently on and planned for the Moon. www.roblafrenais.info

Victor is Professor of Material Culture within the Material Culture Group at UCL and works on the material culture of Low Earth Orbit, architecture, domesticity, the archaeology of the recent past, and critical understandings of materiality and new technologies. Currently he is Principal Investigator of the 5 year European Research Council funded research project: ETHNO-ISS: An Ethnography of an Extraterrestrial Society: the International Space Station (ERC Advanced Grant, no. 833135) and is one of the theme leaders of the ESA_lab@UCL and a co-director of UCL Space Domain.