VIRTUAL IAS Festival: The Weight of Numbers on Bodies 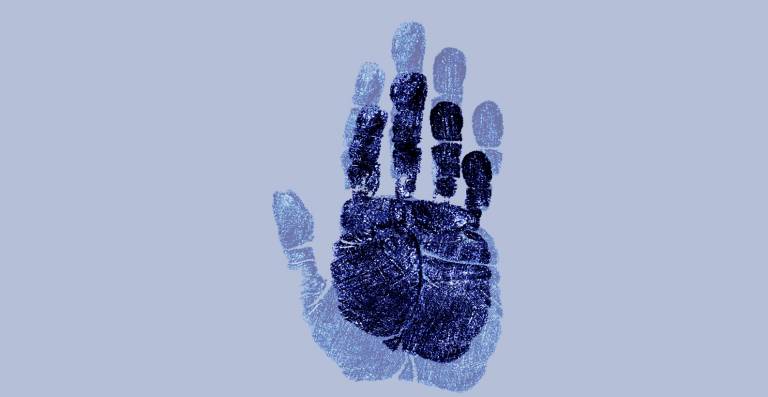 A webinar with Raqs Media Collective on a trace in the Francis Galton Archive at UCL.

Join the event on Zoom

Raqs Media Collective’s presentation is a conversation with a ghostly trace of a human hand, which they found in the archive of the Francis Galton laboratory in University College London. Raqs turn this trace into an art-work (The Untold Intimacy of Digits). The work was originally conceived in response to the  introduction of the Unique Identification Database; a randomly generated 12 digit number linked to biometric data, required to access state services by the government of India. In the webinar they will also discuss how their consideration of the politics of counting and control, biopower and governmentality, takes on new significance in a pandemic ravaged world.

This handprint, taken in 1858, is one of the earliest impressions of the human body taken by a person in power with the explicit purpose of using the trace to identify and verify a human subject. It was taken in lieu of a signature, to affix the identity of a Bengal peasant, Raj Konai (the owner of the now phantom limb) to a document. The handprint became the cornerstone of the edifice of the identification technology that would in time, be associated with fingerprinting and various anthropometric operations.  It was taken under the orders of William Herschel, scientist and revenue official with the Bengal government, and sent to Francis Galton, a London eugenicist and pioneer of identification technologies.

In the animated facsimile, Untold Intimacy of Digits, Konai’s handprint is made to speak in letters instead of numbers. The print is reconfigured to produce an alphabet of gestures – each sign a gloss of the letters in standard American Sign Language, as used by deaf and mute people. The letters add up to a text (which accompanies the work) a stammering, hesitant, syntactically unsure consideration (written by a hand that appears on the wall like the hand that wrote on the wall in the episode of Belshazzar’s Feast in the Old Testament) of the relationship between ‘I’ and ‘We’ and the horizon that encompasses singular and plural modes of being.

Raqs Media Collective was formed in 1992 in Delhi, India by Monica Narula, Jeebesh Bagchi and Shuddhabrata Sengupta. The word “raqs” in several languages denotes an intensification of awareness and presence attained by whirling, turning, being in a state of revolution. Raqs Media Collective take this sense to mean ‘kinetic contemplation’, and a restless entanglement with the world, and with time. Raqs enlists objects such as an early-modern tiger-automata from Southern India, or a biscuit from the Paris Commune, or a cup salvaged from an ancient Mediterranean shipwreck, to turn them into devices to sniff and taste time. Devices unfold thus in order to undertake historical subterfuge, and philosophical query. Raqs practises across several media, making installation, sculpture, video, performance, text, lexica and curation. In 2000, they co-founded the Sarai program at CSDS, New Delhi and ran it for a decade, where they innovated on infrastructural conditions of practices and knowledge production, and also edited the nine-volume Sarai Reader series.

The members of Raqs Media Collective live and work in Delhi, India. They are presently working on toxicity, care and the luminosity of friendship.