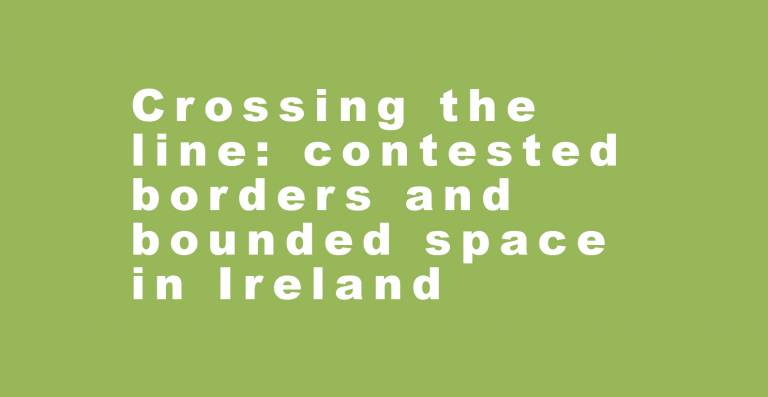 2021 marks the centenary of Irish partition, a major turning point in the histories of Ireland, the United Kingdom and the British Empire. This anniversary provides a moment for reflection on the past but contested boundaries of politics and identity continue to shape Ireland’s present. Much of the recent Brexit debate turned on the Irish land boundary – a site of violent and deadly conflict during the period of the Troubles – with the return of a ‘hard border’ avoided only through the creation of a new and controversial ‘border in the Irish sea’. Amidst talk of a future ‘border poll’ on the prospect of Irish unity, the city of Belfast remains deeply scarred by division. More than twenty years after the Good Friday Agreement, almost 100 walls or ‘peace lines’ still delineate and separate its Catholic and Protestant communities. In this panel discussion, historian Peter Leary, architect Aisling Rusk, and artist and researcher Paula McCloskey, explore the very different ways in which their work seeks to navigate and subvert these lines of demarcation.

Aisling Rusk is a Belfast-based architect and the founder and director of Studio idir (the Irish word for in-between). Her PhD investigated spatial practices that build connection within the divided contexts of Palestine/Israel and Northern Ireland.

Researcher at University of Derby

Paula McCloskey is an artist and researcher at the University of Derby. Her recent work has focussed on borders and includes The Eile Project, an ongoing research project which develops the practice of border-fictioning focussing on the UK/Irish border scene.

Peter Leary is currently a Vice Chancellor’s Fellow in History at Oxford Brookes University and author of Unapproved routes: histories of the Irish border, 1922–72 (Oxford University Press, 2016). He is a former Junior Research Fellow at the IAS.