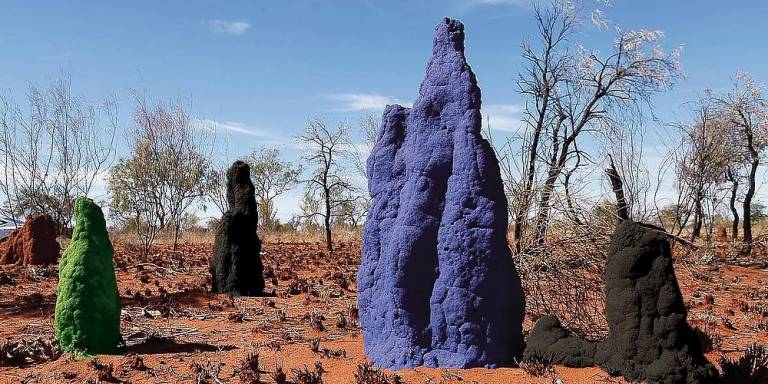 This event has been postponed to the New Year due to planned University and College Union strike action. We hope to be able to announce a new date soon. Reflections on hierarchy, power and animality in the Museum. Confirmed participants: Agnieszka Kurant, Bryony May Dunne, Alena Ledeneva

This event has been postponed to the New Year due to planned University and College Union strike action. We hope to be able to announce a new date soon.

How is hierarchy (political, economic, racial, sexual, inter-species) represented (and denied): in the city, in art, in architecture and in the Museum? For human beings, pyramids are blatant representations of hierarchy (and of death, inheritance, violence, money as well as the cosmos). Pyramids reproduce and consolidate inequality and oppression; but they also provoke reflection, resistance and rebellion. For termites, on the other hand, pyramids are emblems of collaborative endeavour (although for moles, they are the debris of a much more individualistic act of burrowing).

How do Museums represent, resist (and deny) these hierarchies and pyramids? By "decolonising" a natural history Museum at an elite educational institution in the middle of London - without repatriating its collection, much of it stolen or acquired through looting and other acts of violence - are we actually perverting the Power Vertical? Or are we, in fact, acting like the purveyors of a Ponzi scheme, pretending that the Pyramid does not exist, and thereby making it grow even higher, more violent, and more destructive? Is there a way to “blow up” verticality of the pyramid from the bottom? Or does critique always the solidify the inescapability of its form by cementing the cracks?

The good news is that Pyramid schemes always collapse; the bad news, is that it's always the beasts at the bottom who bear the biggest burden.

Beastly Pyramids will take the form of a heterodox symposium divided into several (condensed and intense) "stor(e)ys". Each storey will leave time for contributions from the audience, but it will be organised around a lecture/performance by an invited artist; and a corresponding thinkpiece delivered by a scholar or writer.

This theme relates to both the core themes of Perverting the Power Vertical, our conceptual platform; but also to our theme for 2019-2010, PiraMMMida, which is inspired by the East European pyramid schemes of the 1990s. Beastly Pyramids is organised in conjunction with UCL Culture and is part of the Displays of Power exhibition at the Grant Museum of Zoology.

In 2019-2010, PPV (Perverting the Power Vertical: Politics and Aesthetics in the Global East), will operate under the umbrella theme “PiraMMMida”.

This theme is taken from the name of a 2011 movie about MMM Global, a bank and pyramid scheme established in 1990 by financier and fraudster Sergei Mavrodi (1932-2018), also said to be responsible for the Bitcoin surge of 2018.

PPV functions under the auspices of the SSEES FRINGE Centre. In 2019-2020, PPV is generously supported by the UCL European Institute through its Jean Monnet Centre of Excellence, co-funded by the Erasmus+ Programme of the European Union. PPV is also supported by The UCL Centre for the Study of Contemporary Art and UCL Culture; and is organised in conjunction with the UCL Institute for Advanced Studies and The Avenir Institute.