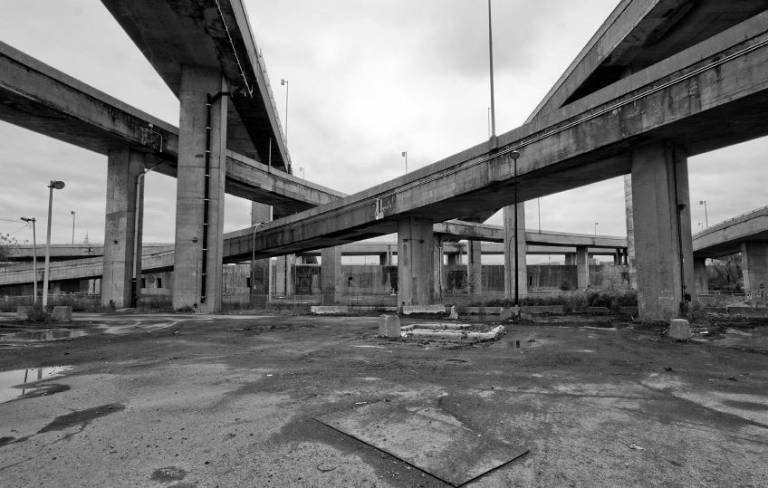 This interdisciplinary one-day workshop, co-funded by the Institute of Advanced Studies as part of its Vulnerability research theme and organised by the Development Planning Unit at the Bartlett School of Architecture, will explore the link between infrastructures, in particular those related to sanitation, and urban vulnerability and stigma. It will engage both early-career and established scholars from a range of fields - including Architecture and Planning, Urban Geography, Critical Legal Studies, and Political Science - in a critical dialogue and encourage alternative presentation formats, including artistic and literary interventions.

Because of their ability to connect and disconnect residents from the city (Rodgers and O'Neill 2012), infrastructures function as sites of contestation and negotiation over what is public or private and who is included or excluded. Infrastructures can thus create vulnerabilities on several levels: the absence of infrastructure-based public services can create health problems, as well as advancing social stigma, both of which can act as an additional threat by legitimising dispossession.  At the same time, reliance on existing infrastructures can also be viewed as a potential vulnerability.

As infrastructures function as symbols of modernity (Larkin 2012), the stigma of lacking access to these urban networks acts as an additional vulnerability to the functional health risks. Dominant urban discourses have historically conflated filth or disease in marginalised areas with the moral defects of their inhabitants, legitimising the existing social order. In colonial contexts, matters of hygiene formed the basis for justifying urban segregation by means of a 'cordon sanitaire' (Nightingale 2012). In Victorian London, infrastructural projects promoting hygiene were seen as essential to moral reform of the city's residents (Otter 2004): linking health with moral improvement of 'depraved' slum dwellers, the 19th century 'city as diseased body' was to be 'cured through the regulation and containment of social bodies' (Roy 2004). Similarly, current-day discourses of blight and decay are used to legitimise interventions of urban renewal displacing residents, whether through slum eradication or urban renewal (Gray and Mooney 2011). As Wacquant (2008) notes, territorial stigmatisation indicates that certain areas of the city lie 'outside the common norm' and thus paves the way for exceptional treatment of those areas - including dispossession.

At the same time, vulnerability is not only caused by the absence of infrastructural services. In recent years, the vulnerabilities caused by our ever-increasing reliance on infrastructural networks have been highlighted by infrastructural and cyber warfare (Graham 2004). Pointing towards our deeply embedded intermeshing with socio-technical systems around us, Gandy (2005) has even referred to infrastructures as an 'exoskeleton' - extensions of our bodily selves without which our survival would be questionable. In a similar vein, Butler (2016) theorises the human body as ontologically characterised by 'dependency on infrastructure', including human and non-human support systems. As we are always more-than-ourselves and outside-of ourselves, she argues, vulnerability is the corollary of this subjecthood based on interconnection and relationality.

Urban infrastructures are not only the issue of political protest, but are often a prerequisite for any form of politics, Butler argues. In linking the most intimate human spheres with the public realm, infrastructures open up questions of health both from the perspective of urban policy and planning and from that of bodily and mental integrity. In connecting these differing realms, infrastructures allow for an analytical intersection of scales - in line with recent work on 'urban geopolitics' (Graham 2004, Roy 2004, Yacobi 2012) as well as the sliding scales of violence in 'intimacygeopolitics' (Pain and Staeheli 2014).

The importance of questions surrounding infrastructure-based vulnerability has recently come into sharp focus in the UK. Government deregulation and opposition to 'health and safety' measures have had an appreciable impact on lives and survival, as was seen in the Grenfell Tower fire and thousands of premature deaths from smog in London. Taking into account the contemporary nature and renewed urgency of understanding infrastructural stigma and vulnerability, the workshop will seek to address the following questions, among others: