All of her material, as well as future outputs from the collective of which she is part (Academic Violence), can be found on the forthcoming website: www.academicviolence.com

Conservation has undergone something of a strategic and methodological facelift in the past two decades. Top-down, militarised forms of governance – in which local communities are ripped from their ancestral homes, evicted from lands whose soil they once tilled, and barred from forms of economic and cultural actions that once peppered natural landscapes and panoramic vistas – remains a core component of mainstream conservation. Local engagement and community participation now too form part of the “people-centred” approaches that increasingly constitute more ethical forms of conservation. This shift is driven in part by a growing recognition of the interdependence between biological and cultural diversity. It is also, however, motivated by an attempt to legitimise and erase the multiple axes of violence along which conservation and climate action too often find themselves. Traditional ecological knowledge is siphoned off; its holders plucked from the fabric of local society, destabilising and further stratifying existing social and political structures; the customary practice which maintain it are eroded, distorted and commodified. These consequences have led many scholars to inspect more closely the nature of community participation and the conditions necessary for ethical manifestations of such engagement.

Lydia Gibson’s research explores the forms of violence that emerge from participation in conservation – not just as enacted through engagement with conservationists and corporate entities but with allies and colleagues whose advocacy relies on imaginaries, performances and strategies that rupture identities, disrupt practices and stratify communities along fault lines of expertise. Lydia Gibson’s PhD examined the impact of conservation on forest use in an indigenous Jamaican Maroon community, as it disrupted the social, cultural, political and economic arrangements necessary for engagement in the limited set of traditional practices that remain. Primarily focused on the centuries-old practice of parrot-hunting, her research documented the sets of conditions that denied access to the exclusive activity and brought it to the brink of collapse. While social science is replete with important examples of conservation decimating livelihoods and crop production, and displacing the rural poor, Lydia’s work highlights the crippling effect of conservation on small, unknown, complex, indulgent, seemingly-expendable cultural practices and its consequences on the power and knowledge asymmetries in which such actions are enmeshed.

Lydia has trained and continues to work across natural and social sciences, with an undergraduate degree in Maths and Biology from the University of Bristol and a Masters degree and PhD in Anthropology from UCL. Lydia is the Principal Investigator of a number of conservation and research projects in Cockpit Country, Jamaica. This includes an indigenous mapping website (www.countermappingcockpit.com) and a collaborative research project engaging multiple conservation stakeholders in efforts to generate spatial and genomic baseline data of the black-billed parrot – one of Jamaica’s two endemic parrot species, recently upgraded to Endangered as a result of Lydia’s doctoral findings (see https://www.iucnredlist.org/species/22686231/180748265). Both are funded by the National Geographic Society (see https://www.nationalgeographic.org/find-explorers/lydia-gibson for project details). Lydia’s current research seeks to understand how the extraction of ecological data and knowledge (as meta-resources) reproduces colonial legacies and legitimises this era of surveillance capitalism in the way that plantation economies underwrote industrial capitalism and how the power asymmetries that have been studied in the context of conservation can be applied to other institutions within academia and broader knowledge economies. 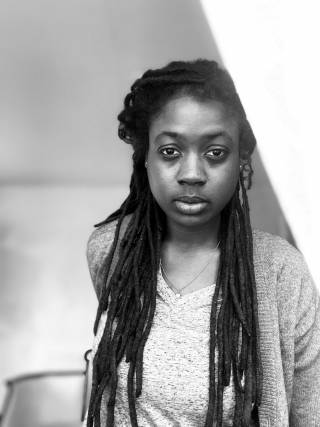