In the last months of National Socialist rule, thousands of German men and women were summarily and publicly executed, not by the advancing Allies, but by their own compatriots, their Volksgenossen. If we accept the Nazi regime as a racist society, and there is obviously no reason not to, then the vast number of executions of Germans in 1945 stands out. We see that, under the cloak of draconian law, decentralised ‘frontier justice’ was perpetrated by local groups of actors with little to no legal training or authority.

Joining UCL in 2020 as part of the collaborative AHRC-funded project Compromised Identities? Reflections on Complicity and Perpetration under Nazism (2018-2021), Bastiaan Willems examines the motivations behind the public executions of soldiers and civilians during the final stage of the Second World War. Rather than merely considering these brutalities as the final trappings of National Socialism – the current historiographic consensus – his research takes an interdisciplinary approach, exploring how intra-ethnic violence was influenced by factors such as Germans’ collective cultural memory, local concerns, social and psychological factors, the militarisation of the home front, and the retreat of the military onto German soil.

In his PhD in History, completed at the University of Edinburgh, he focused on intra-ethnic violence in the province of East Prussia in the final year of the Second World War. He has published articles with the Vierteljahrshefte für Zeitgeschichte, the Journal of Slavic Military Studies, and The New Past / Новое Прошлое, and his first monograph, Violence in Defeat: The Wehrmacht on German Soil 1944-1945, will be published with Cambridge University Press in early 2021. 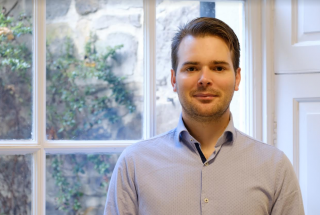