UCL researchers have shown that damage to the lining of the gut plays an important role in the development of rheumatoid arthritis, paving the way for a new approach to treating the disease. 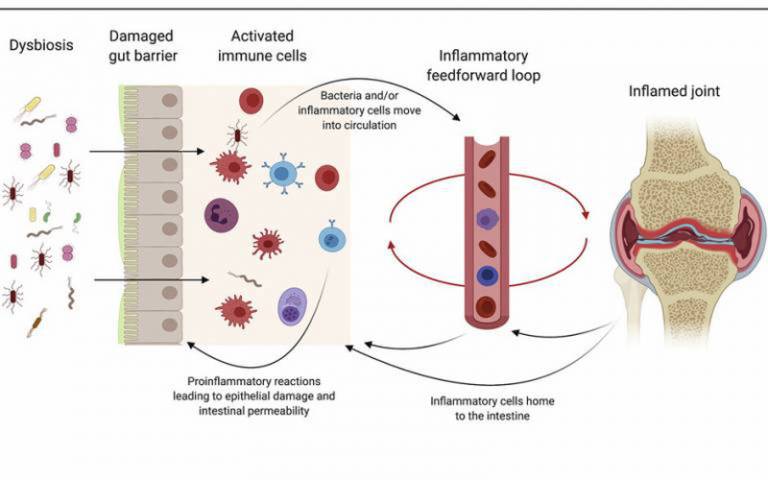 In the pre-clinical study, which used mouse models and patient samples, the research team propose that restoration of the gut-barrier could offer a new therapeutic approach to reducing the severity of Rheumatoid arthritis (RA) symptoms.

Co-lead author, Professor Claudia Mauri (Division of Infection and Immunity), said: “We wanted to know what was happening in the gut and whether changes to the intestinal lining – which usually acts as a barrier to protect the body from bacteria – are a feature of the disease and contribute to its development.”

Using pre-clinical mouse models and patient samples, the team found that blood markers of gut damage were raised compared to healthy people even at the earliest stages of arthritis, and that these markers of damage got higher the more the disease progressed; and, unexpectedly, there were distinct signs of inflammation, as might be seen in inflammatory bowel disease. The team also showed that the lining of the gut became ‘leaky,’ potentially allowing the passage of bacteria to cross the gut lining into the body, enhancing inflammation both in the gut and potentially in the joints.

“Our findings suggest that the intestinal lining is a therapeutic target. Importantly, we found that using existing drugs that restore the gut-barrier integrity i.e., prevent the gut from becoming leaky or inhibit inflammatory cells from moving to and from to the gut, could reduce the severity of arthritis in pre-clinical models,” says Professor Mauri.

“Current treatments for rheumatoid arthritis don’t appear to correct the problems in the gut and so may leave the patient susceptible to reactivation of disease from the continuing inflammation in that area. Going forward, we need to evaluate the therapeutic impact of treating the intestinal lining of rheumatoid arthritis patients in addition to their joints. Maintaining gut health both through diet and pharmacological intervention may be a valuable new strategy.”

The study is published in Med, a Cell journal, and was funded by Versus Arthritis and UKRI/MRC.