A pioneering study by UCL scientists has discovered the presence of a harmful inflammatory protein in patients with symptomatic tuberculosis (TB). 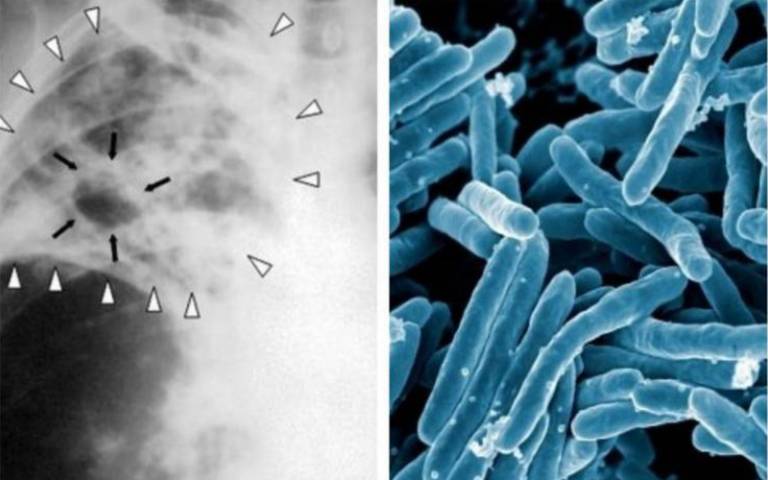 Researchers say, by targeting the IL-17 cytokine, a component produced naturally by the immune system in response to infection, excessive and damaging lung inflammation caused by TB may be significantly reduced to help speed up patient recovery.

TB is an infection caused by the bacterium Mycobacterium tuberculosis and is the leading cause of death from infections worldwide. The World Health Organisation estimates that 1.4 million people died of TB disease worldwide in 2019.

Explaining the experimental study, lead author Dr Gabriele Pollara (UCL Division of Infection & Immunity), said: “For most people the body’s immune response to TB is a vital defence strategy to contain the infection, but when disease develops it can worsen symptoms, cause lung damage, and promote transmission of the infection to others.

“For some time, we have thought that the body’s own immune response to TB could in fact be causing more tissue damage and promoting the spread of infection – but we did not know how this happens.

“In this study, we found that in patients with active TB, the immune system may be responding pathologically (causing harm), and that this immune response was not present in those with latent TB, who have controlled the infection.”

As part of the study, published in Science Translational Medicine, medical centres in the UK, South Africa and Peru recruited patients to take a tuberculin skin test (TST), which involves injecting a small amount of fluid (called tuberculin) into the skin on the lower part of the arm. Raised skin or swelling, detected 48 hours later, denotes a positive test.

Subsequent tests confirmed 48 of the people recruited had symptomatic TB and 191 people had asymptomatic/latent TB. Genome-wide transcriptional profiling of biopsies of the TSTs was then carried out to make detailed measurements of the immune response.

Researchers discovered that samples from patients with symptomatic TB disease showed increased activity of IL-17 cytokine, which is an immune response known to cause tissue damage in other inflammatory conditions.

Dr Pollara, an NIHR Clinical Lecturer, added: “This new research has identified for the first time the nature of these potentially harmful immune pathways. We show that a specific immune pathway, the IL-17 cytokine, is present exclusively in the immune response of patients with TB disease, but not those who never develop symptoms.

“This is a fascinating finding because IL-17 cytokine responses cause disease and tissue damage in other inflammatory conditions, such as psoriasis and ankylosing spondylitis. In both conditions, drugs that block the IL-17 pathway are highly effective at improving patient symptoms, and so our findings indicate these same drugs could also be beneficial in treating patients with TB disease.”

For over 50 years, the mainstay of treatment for tuberculosis has been antibiotics that kill bacteria. Although effective, this strategy carries a lot of challenges; treatment involves taking four antibiotics and lasts for at least six months, and its efficacy is being increasingly challenged by rising rates of antibiotic resistance. Therefore, developing new approaches to treating TB disease is an urgent global research priority.

Senior author, Professor Mahdad Noursadeghi (UCL Division of Infection & Immunity) said: “Our work has the potential to make a step change in care of TB patients, providing a rationale for targeting specific immune components, alongside the conventional use of antibiotics.

“We anticipate this would accelerate clinical recovery, interrupt transmission between individuals and reduce the time antibiotic treatment is required. More broadly, these findings open the door to an exciting new frontier in treating infectious diseases.

“By understanding immune responses to infections that are detrimental, it justifies the use of focused ‘host-directed’ drugs that complement the action of antibiotics. In turn this strategy has the potential to limit disease severity, shorten antibiotic courses, and therefore mitigate against the rise in antibiotic resistance worldwide.”