Professor Alexandra Olaya-Castro is encouraging more women and under-represented groups to pursue science careers with media appearances and talks to the general public across the UK, Colombia & USA. 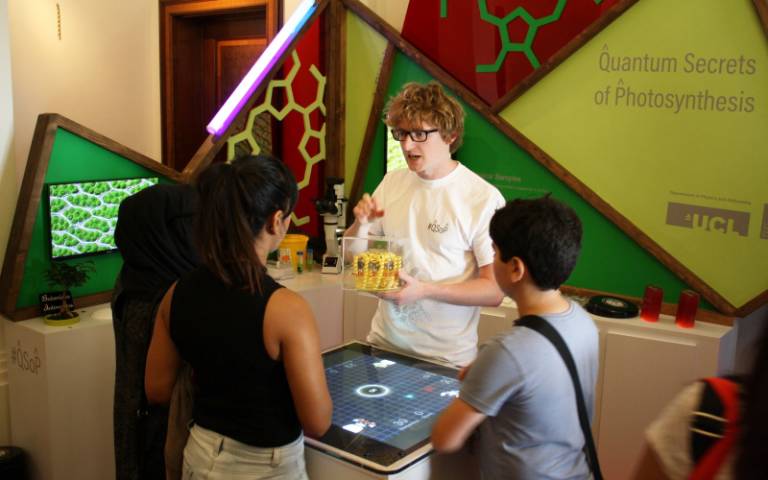 Quantum biology is an emerging interdisciplinary scientific field that brings together biology with quantum science – the study of matter and energy at its most fundamental level. It investigates whether, and how, quantum phenomena at the molecular level is involved in biological functions, from how birds navigate through to photosynthesis in plants.

Professor Alexandra Olaya-Castro and her group in the Department of Physics and Astronomy at UCL develop theories that bring together modern quantum science, physical chemistry, and biophysics.

One focus of her work is photosynthesis, the most important energy conversion process on our planet, which produces all molecular oxygen on Earth. Her research has provided crucial findings such as theoretical evidence that quantum vibronic processes can influence the early steps of photosynthesis in non-trivial ways – by synchronising electronic and nuclei motions to optimise energy transfer within the molecules that absorb and convert solar energy in nature.

Taking quantum biology to the public

Over two million members of the public in the UK and internationally have engaged with Professor Olaya-Castro’s research through her appearances on television programmes, exhibitions, public talks, and press and blog interviews.

For example, her research featured on the first ever TV programme to cover the topic of quantum biology, BBC Four’s “The Secrets of Quantum Physics”. It reached around 800,000 viewers and had a further 1.8 million views online with a 93% positive rating. The programme’s director said that Professor Olaya-Castro’s contribution “played a crucial role…demonstrating how science research, which can sometimes seem quite esoteric, has relevance to all of our lives.”

Inspiring the next generation

Building on her track record in public and media engagement, Professor Olaya-Castro went on to create an exhibit called “Quantum secrets of photosynthesis” at the Royal Society’s annual Summer Science Exhibition in 2016 – which was visited by more than 14,000 A-Level students, teachers, members of the public, and journalists. Of the student visitors surveyed afterwards, 80% said that the exhibit had increased their interest in science and their understanding of it.

Professor Olaya-Castro’s group created a mobile version of the exhibit and took it to music festivals in 2017 and 2019 including Glastonbury, Green Man, and UCL Bloomsbury Festival, reaching tens of thousands more non-academic audiences including children, teenagers, and young adults.

Professor Olaya-Castro is in popular demand as a public speaker worldwide, inspiring an interest in science in diverse audiences in the UK, Colombia, and USA. Highlights include a talk on the quantum effects of photosynthesis at the Royal Institution in March 2015 and a TEDx talk in Bogotá in 2016, where she discussed both her work and her career path as a first-generation graduate and female physicist to a sold-out audience of 820 businesswomen and NGO workers.

Through her talks across the UK, Colombia, and the USA she has brought her science to diverse audiences and is helping to encourage more women and people from disadvantaged backgrounds to pursue careers in science - as highlighted by the director of the BBC Radio 4 programme “Magic Numbers: Hannah Fry’s Mysterious World of Maths”, on which Olaya Castro appeared. Giles Harrison, director of Magic Numbers, said: “Professor Olaya-Castro is an inspiring role model; her enthusiasm, passion, knowledge and cutting-edge research are subtly promoting both the rewards of a career in science research, and the message that gender is no barrier to success.”

Professor Alexandra Olaya-Castro has inspired about two million people worldwide through exhibitions, television programmes, and media appearances on her research on the quantum effects on photosynthesis. Her general public talks across the UK, Colombia, and the USA are inspiring more women and people under-represented in STEM to pursue science careers.