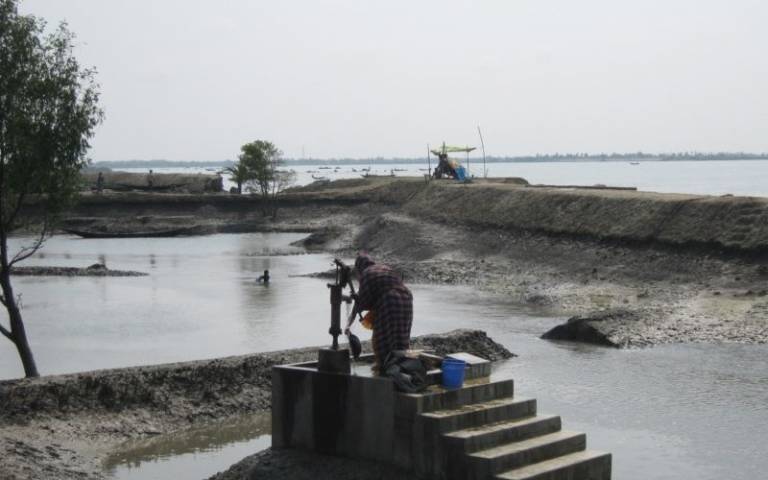 Sustainable access to fresh water is one of the most critical contemporary challenges humans face. The problem is particularly pressing in the tropics, where demand for water is rising while climate change is making water supplies from rivers and lakes more unpredictable.

Conventional approaches to addressing water scarcity in the area have typically involved the construction of dams, but these are expensive, vulnerable to water loss and can often cause friction between different users.

Professor of Hydrogeology, Richard Taylor (UCL Department of Geography), and his team have made enormous contributions to our understanding of groundwater systems in tropical Africa through in-depth field observations with remote sensing and modelling.

They have shown that tropical groundwater is often replenished by episodically intense rainfall, that can be predicted by large-scale influences such as during ‘El Niño’ events.

As intense rainfall becomes more frequent in the tropics due to climate change, groundwater supplies are more climate-resilient than previously thought.

These findings have undone the ‘high certainty’ consensus of the last assessment of the Inter-governmental Panel on Climate Change, that climate change will decrease groundwater resources in dryland environments of tropical Africa.

Professor Taylor’s evidence is shaping responsive global strategies to adapt to climate change and demand for fresh water in the tropics. The IPCC, African Ministerial Council on Water, Overseas Development Institute, UN Environment and UN Water, and Governments of Switzerland, Uganda, Tanzania, Niger all recognise and cite his evidence of the natural resilience of groundwater resources to climate change.

Since 2000, through his collaborative research partnership with the Ugandan Ministry of Water and Environment, Professor Taylor has modelled and mapped groundwater resources in the weathered crystalline rock environments that lie under most of Uganda. This has directly informed the Ugandan government about the country’s groundwater resources and options for water supply development, which has convinced them to shift from drilling expensive boreholes to shallow, less costly and more productive wells where this is viable.

In Tanzania, a relocation of government offices into the capital city of Dodoma in 2015 brought with it new pressures on water supply. Professor Taylor’s collaborative work with the Tanzanian Ministry of Water, Sokoine University of Agriculture and Dodoma Urban Water Supply and Sewerage Authority has increased local awareness about the importance of ‘El Niño’ events for groundwater replenishment and prompted an evaluation of water supply in the area.

Groundwater supplies are now also central to policy in Niger on water and food security in the face of climate change. This is thanks to Professor Taylor’s collaboration in the GroFutures project to show how and where Niger’s groundwater supplies are replenished. This has led to his research being cited in a national plan to revise the total potential of irrigable land by exploiting groundwater.

Professor Richard Taylor’s research has demonstrated the renewability (and therefore climate change resilience) of groundwater resources in tropical Africa. As water supplies from rivers and lakes become less certain, Taylor’s research is helping more people access safe water in towns and cities in Uganda, Kenya and Senegal. His work has confirmed the renewability of the water supply not only to Tanzania’s rapidly growing dryland capital city, Dodoma, but also for irrigation and drinking water in semi-arid Niger.