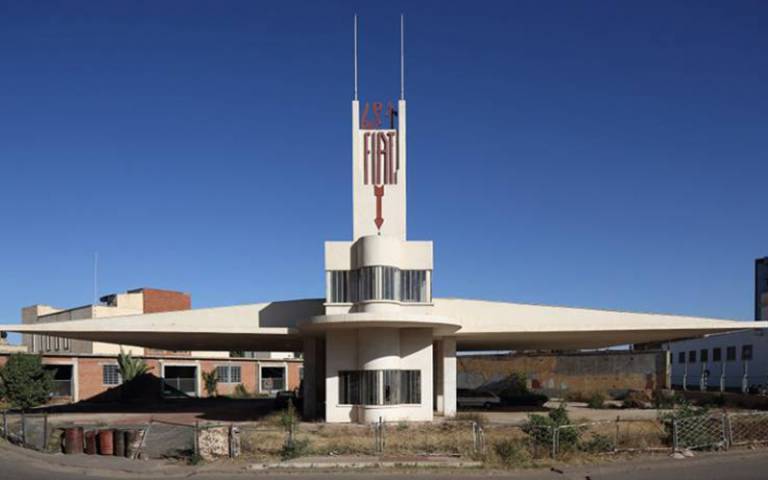 The award represented Eritrea’s first World Heritage Site and the first explicitly Modernist site in Africa to achieve this status. The work also led to new building regulations and heritage laws in Eritrea and supported the establishment of the Modern Cities Network (MCN) and the Modern Heritage of Africa (MoHoA) initiative.

20th century architecture’s longstanding western-centric focus has led to its failure to recognise many key figures, regions, experiences, and approaches which lie outside of this narrow sphere. Asmara, the capital of Eritrea is one such example.

This was highlighted to Professor Edward Denison (UCL Bartlett School of Architecture) on a visit to Asmara in 1997, where he was struck by the fact that the area’s unique historical, cultural and architectural significance was almost completely unrecognised in professional literature or even publicly.

Asmara was planned and designed by the Italians during the colonial period ending in 1941. But what makes its built heritage so significant, indeed unique, is the African context in which it was realised and the qualities it possessed, but which are overlooked. For example, the colonialists’ reliance on Eritrean materials, skills and labour.

The erasure of local voices, experiences and contributions in colonial histories reflects the same tendency in modernist history, which continues to uphold the Western values and norms on which it was established, while overlooking or obscuring the contributions of others.

Since 2010, Professor Denison and Ms Ren have collaborated extensively to bring attention to the dual issues of architecture’s western-centricity and histories of modernism outside the West.

The pair conducted substantial research into the history of the area in northeast China formerly known as Manchuria. This work explored the architectural impact of the invasion of Manchuria by Russia and later Japan and in particular, focused on Japan’s imperial programme of ultra-modernity in the region. In 2017, this work won the RIBA President’s Medal for Research.

This unique expertise in modernism and critiquing its western-centricity meant Professor Denison and Ms Ren were ideally placed to support Asmara in its bid to become a UNESCO World Heritage site.

In 2014, the Eritrean government established the Asmara Heritage Project (AHP), commissioning Professor Denison to provide the evidence to support the bid based on his research with Ms Ren. The additional work took over four years, with Professor Denison and a team of more than 30 Eritrean colleagues completing various tasks, including digitising over 80,000 architectural drawings, photographs and documents, sourcing and renewing historical maps, surveying buildings and open spaces.

Professor Denison compiled this work into a publicly available 1,300-page Nomination Dossier for the World Heritage List application. A summary of this dossier won the RIBA President’s Medal for Research in 2016.

On 8 July 2017, Asmara was successfully inscribed onto UNESCO’s World Heritage List. This is not only the first site in Eritrea to receive the status, but also Africa’s first modernist World Heritage Site.

Having attracted research funding from numerous sources to complete the initial UNESCO bid, the EU pledged €300,000 for safeguarding the site and supporting other initiatives, which included:

An update of the city’s building regulations, not changed since 1938; a conservation masterplan to protect the city’s assets; an integrated management plan which specifies the approach to balancing heritage protection and contemporary needs; a disaster risk management plan; and the introduction of Eritrea’s first ever heritage laws. These changes will help to both conserve Asmara’s unique heritage and benefit the city’s 500,000 residents.

Asmara’s inscription has also challenged international perceptions of Eritrea, where it is often misrepresented as being in perpetual conflict. Within the country, outreach work has helped to change perceptions of the city from run-down, old and neglected, to precious, antique and a valued cultural asset to be protected.

The inscription has also acted as a beacon of change for modern heritage cities, resulting in invitations to consult on future UNESCO bids from cities across Africa, Asia and Europe, opening new opportunities to highlight the racial, cultural and social inequities created and sustained by modernism and modernist history, and to broaden the recognition and preservation of modern heritage globally.

Professor Edward Denison and Guang Yu Ren’s two decades of research and consultancy work in Asmara, Eritrea, has brought recognition to the exceptional built environment of the area, culminating in its inscription as a UNESCO World Heritage Site. This is Eritrea’s first World Heritage Site and the first explicitly Modernist site in Africa to achieve this status.