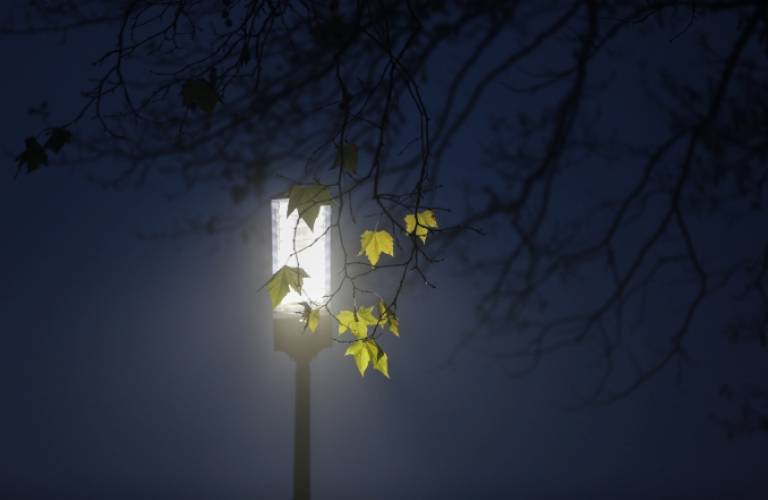 UCL research found that lower levels of brightness are required for white streetlights than for yellow sodium vapour lights. Switching to these dimmer lights led to energy savings of 30-40% and saved 113 GWh of electricity in 2012 alone.

Street lighting is a massive infrastructural undertaking that uses a lot of energy. In the UK in 2005, there were 8.12 million lighting points on the country's streets using approximately 3.14 TWH of electricity, which gave rise to CO2 emissions of 1.32 megatons. 6.31 million of these lighting points were street lights. With the rise in environmental concerns, pressure grew on local authorities to reduce the level of public lighting so as to save energy. Yet street lighting provides many important benefits related to crime prevention and public safety.

It had been found that one of the key indicators of adequate street lighting was for two people to be able to recognise each other at a distance of four metres. By setting up a dummy street and using different kinds of lighting and a wide range of experimental subjects, Peter Raynham (UCL Institute for Environmental Design & Engineering) showed that white lights with lower illuminance had the same benefits as brighter sodium lights. This meant that it was possible to maintain the social and public safety benefits of high amounts of street lighting - for pedestrians and motorists alike - but reduce energy use by a third, simply by switching to white street lights.

In 2003, the same year these findings were published, the British Standard for Street Lighting was reissued with revised guidance based on this research. In particular it permitted dimmer white lights to be used on subsidiary roads and, as a result, there was been a growing move towards white lighting. Indeed, all residential street lighting renovations since 2006 financed through Public Finance Initiatives moved to white lighting. The number of white lighting units grew from 450,000 in 2008 to 1.45 million in 2012.

The reduction in energy usage, and thus the UK's carbon emissions, has been significant. In 2012, the change to white lighting saved 112 GWh of electricity in the UK, and saved local councils over £10 million in electricity costs. This represents a total saving of 45 megatons of CO2 emissions in 2012, or nearly a tenth of the UK's emissions savings that year.