The legality of torture 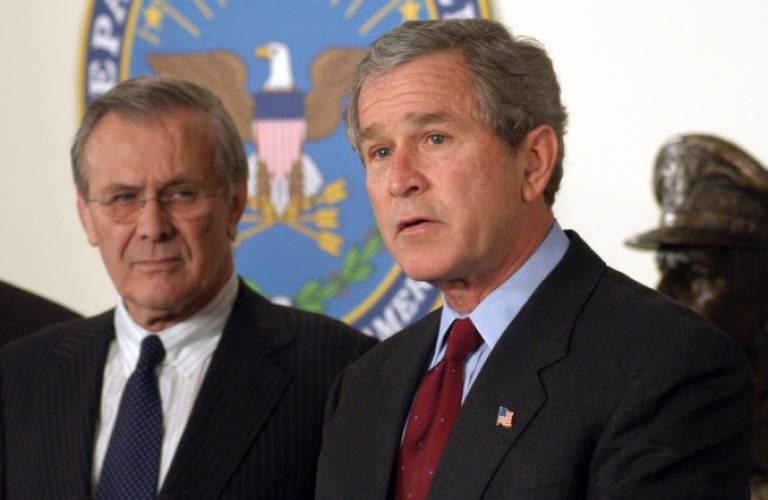 The Torture Team research project at UCL Laws has influenced how governments, legal proceedings and the public regard the torture of suspected terrorists, and provided an important contribution to United States Congressional Investigations into torture at Guantanamo Bay.

In 2002, as the US government grew increasingly concerned that a top detainee at Guantanamo Bay, Prisoner 063, would not talk, high-ranking administration lawyers argued for extreme interrogation measures which circumvented international law, the Geneva Conventions and the US Army's Field Manual. These measures formed the subject of what are now known as the Torture Memos: the trail of justifications by which the United States military allowed the use of 'enhanced interrogation techniques' as part of the 'War on Terror'. These memos paved the way for enhanced interrogation to be used at Guantanamo Bay, and later at Abu Ghraib (Iraq) and other locations.

Torture Team is a research project led by Professor Philippe Sands (UCL Laws) which investigated how the decision was made by the Bush Administration to allow the use of these enhanced interrogation techniques. In 2006-07, Professor Sands analysed official documents and interviewed high-ranking lawyers and officials in the Administration and the military to arrive at an understanding of the role lawyers played in this decision. He found that the torture policy emerged from the very highest levels of the Bush Administration, and enhanced interrogation policies were designed and implemented with the assistance of some of the Administration's top lawyers, circumventing normal military decision-making processes. This research was published in a book titled Torture Team, and in an article in Vanity Fair.

Torture Team research successfully challenged the narrative of the US administration on the legality and use of enhanced interrogation techniques at Guantanamo Bay. When, in 2008, an unpublished draft of the Vanity Fair article was made available to the US House of Representatives Judiciary Committee, Congress convened hearings to address the role of the Bush Administration. Professor Sands was invited to testify twice in 2008 and the Vanity Fair article became part of the official Congressional record. Using the article, the Congressional Committee identified key Bush Administration officials to subpoena for testimony before Congress. As a result, David Addington, Chief of Staff to the Vice-President, and Douglas Feith, former Under Secretary of Defense for President Bush, were questioned by Congress about the evidence presented in Torture Team.

The publication of Torture Team led directly to two judicial investigations in Spain. In 2009, a criminal investigation was opened on six legal advisors who were alleged to have enabled and abetted torture. In 2011 the case was stayed by a Spanish court, and is now under appeal. In a separate case launched in 2009, the Spanish courts are investigating allegations that four former Guantanamo inmates, who were Spanish citizens, were tortured.

The research proved an important source of evidence for human rights groups, including Human Rights Watch which used it as an authority in a report on mistreatment of detainees by the Bush Administration, and the Constitution Project's Task Force on Detainee Treatment, a bipartisan panel, which relied on Professor Sands' research to provide authority for the finding that the US government engaged in torture.

Professor Sands' research also changed the public discourse on torture worldwide. It received global media coverage and the monograph sold thousands of copies. It even catalysed public theatrical performances in the UK and US, starring performers such as Vanessa Redgrave and Ralph Fiennes.