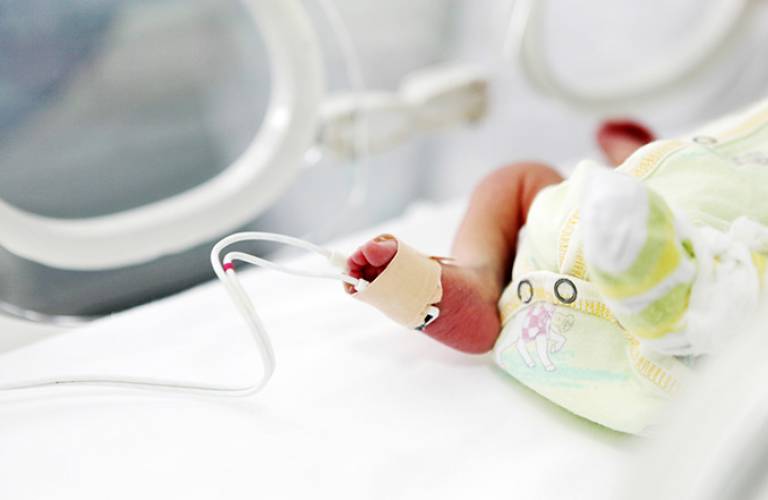 UCL research has pioneered neurophysiological measurement of pain activity in the human infant brain and applied this in the first randomised clinical trial of neonatal analgesic efficacy using a quantitative neural outcome. The trial has significant implications for healthcare policy and practice in the treatment of hospitalised infants.

Eight per cent of all live births in the UK are preterm. Many of these infants spend time in special care, where they are necessarily subject to repeated invasive and painful procedures, with a median of ten per hospitalised day. Despite this, pain among this patient group is undertreated. Analgesics are administered on an ad hoc basis and evidence of their efficacy is only imprecisely understood. As such there is an acknowledged - but currently unmet - need for a scientifically sound, evidence-based, and clinically useful framework for the management of anaesthesia and analgesia in neonates.

However, analgesic trials in the infant population entail major challenges, especially in terms of defining a reliable, quantitative outcome measurement of pain. The current most commonly used measures are based on observations of behaviour and indirect physiologic responses. These rely largely on human observation and judgment and take no account of the developmental changes in infant motor behaviour. For the treatment of pain in infants to be improved, trials must be conducted with more reliable, quantitative measures, and work by Professor Maria Fitzgerald (UCL Division of Biosciences) has begun to address this requirement. The Fitzgerald Lab's first studies on human infants focused on the measurement of spinal nociceptive reflexes and their sensitisation to repeated skin-breaking procedures and surgery. Later studies explored activity in the brain, using near-infrared spectroscopy and electroencephalography to measure cortical activation in response to time-locked, clinically required heel lances used to draw blood for clinical monitoring.

With uncertainty around the role that pain plays in a baby's neurodevelopment, this research is a vital tool for informing healthcare decision makers. - Professor Chris Kennard, Chair of the MRC's Neuroscience and Mental Health

Professor Fitzgerald and her colleagues discovered that even the youngest infants displayed measurable brain activation following tissue-damaging noxious stimuli. The evoked response was also shown to increase with gestational age, but premature infants who had undergone repeated noxious stimuli in intensive care had larger evoked nociceptive potentials than age-matched counterparts who were born full term. This confirmed basic laboratory studies showing that such stimulation can lead to prolonged sensitisation of nociceptive circuits and increased pain. In other words, preterm infants repeatedly exposed to pain were more sensitive to it than their full-term counterparts who had not endured these experiences.

Although all of the infants displayed specific brain activation following heel lances, however, not all were able to display pain facial expressions or physiological responses to that pain, making the recorded neural activity in the brain much more reliable than observational measures alone. Professor Fitzgerald and colleagues therefore decided to use this specific nociceptive brain activity as the quantitative neural measure of infant pain in the first randomised controlled analgesic trial in newborn infants, conducted at University College London Hospital between 2009 and 2010.

The trial demonstrated important inadequacies in analgesic methods currently used in neonatal care units around the UK and elsewhere. It demonstrated, for example, that oral sucrose, a commonly used 'analgesic' for procedural pain in infants, does not in fact significantly affect activity in neonatal brain or spinal cord nociceptive circuit. As such, sucrose is unlikely to be an effective analgesic drug; any capacity that it shows to reduce clinical observational scores after noxious events in newborn infants should not be interpreted as pain relief.

These results generated much interest among healthcare professionals. The trial was reviewed on the Faculty of 1000 website, discussed in Nature Medicine, and reported on numerous medical sites in the UK and the USA. Professor Chris Kennard, Chair of the MRC's Neuroscience and Mental Health funding board, acknowledged its "significant implications for healthcare policy".

The work has, moreover, also engaged a public audience with this important area of research, especially through its coverage in the public as well as practitioner press but also through Professor Fitzgerald's contribution in 2011 to a BBC Horizon programme titled The Secret World of Pain, which reached 1.96 million viewers.