Improving the diagnosis and management of dementia 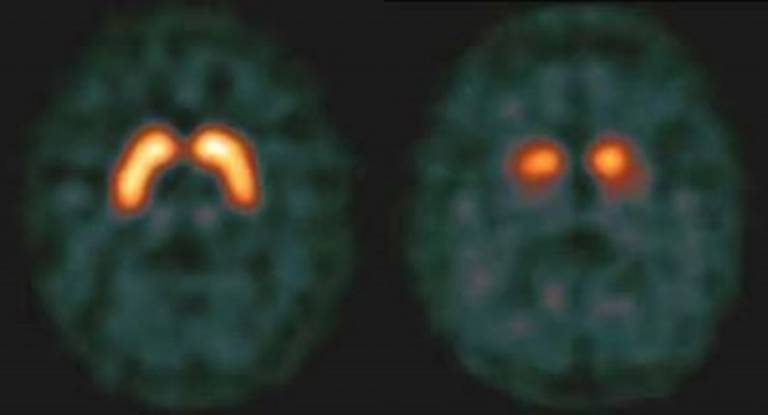 UCL research has improved understanding and reduced misdiagnosis of Dementia with Lewy bodies. This has been achieved by demonstrating that people with this form of dementia experience reduced dopamine transporter uptake in the basal ganglia, and by using a new brain imaging technique to measure this uptake.

Dementia with Lewy bodies (DLB) accounts for up to 15% of all cases of dementia in older people. Already affecting more than 100,000 people in the UK, its incidence is increasing as the population ages.

DLB is difficult to diagnose, being particularly frequently mistaken for Alzheimer's disease (AD). Important differences in the prognosis, course and clinical management of DLB from other dementias - including AD - means that this diagnostic confusion can have serious detrimental effects on patient outcomes.

At UCL, a programme of research set up to address the problem of frequent misdiagnosis has led to the development of a new brain imaging technique that significantly improves the accuracy of DLB diagnosis. Building on their early finding that people with DLB experience reduced dopamine transporter (DaT) uptake, a research team led by Dr Zuzana Walker (UCL Psychiatry) has tested the idea that imaging that dopaminergic deficit (using the dopaminergic presynaptic ligand FP-CIT (DaTSCAN) and single photon emission computed tomography - SPECT) might be used to distinguish DLB from AD.

Between 1999 and 2007 two large-scale studies conducted to test this hypothesis confirmed the sensitivity and specificity of dopamine transporter imaging for the diagnosis of DLB. Results from the most recent - and largest-ever - study of "possible" DLB cases (patients with only one typical feature of DLB) continue to support this view: the first results of DaTSCAN Imaging in Subjects with an Uncertain Diagnosis of Dementia with Lewy Bodies, a European study designed by Dr Walker and sponsored by GE Healthcare, were published in an abstract in 2013 at the American Academy of Neurology Meeting with the full paper due to be published on line this month. The new data show that DaTSCAN imaging showed abnormal uptake in 43% of subjects with possible DLB at baseline. Physicians' confidence and ability to make a correct diagnosis of probable DLB was shown to significantly improve following DaTSCAN imaging.

The cumulative findings of this research have had national and international impacts on clinical practice, with dopamine transporter imaging by FP-CIT (DaTSCAN) SPECT becoming the standard method of DLB diagnosis. In 2005, revised clinical criteria issued by the DLB Consortium concluded that: "Low striatal DAT activity also occurs in DLB but is normal in AD, making DAT scanning particularly useful in distinguishing between the two disorders". In 2006, the European indication for DaTSCAN (previously authorised only for patients with clinically uncertain Parkinsonian syndrome) was expanded to include differentiation of probable DLB from AD. In the same year, the method was incorporated into National Institute for Health and Clinical Excellence (NICE) clinical guidelines for dementia, and DaTSCAN imaging is now standard practice in the clinical diagnosis and subsequent management of patients with suspected DLB in the UK.

In 2009, with contribution from Dr Walker, the European Association of Nuclear Medicine issued guidelines on DaT SPECT imaging, citing the UCL research in recommending that "[123I]FP-CIT imaging is indicated for the differentiation of dementia with Lewy bodies from other dementias". Guidelines issued in 2011 by the European Federation of Neurological Societies and European Neurological Society also cite the UCL work in support of using FP-CIT SPECT to distinguish DLB from non-DLB dementia.

In 2009, GE Healthcare submitted an application to the US Food and Drug Administration to license DaTSCAN for patients presenting with symptoms or signs suggestive of dopaminergic neurodegeneration. This application, which was approved, made frequent references to the UCL research and Dr Walker provided expert advice to the panel.

The most important outcome of this influence on clinical guidelines and, subsequently, clinical practice is its vital effect on the achievement of early, accurate diagnosis of DLB, which helps to ensure optimal clinical management of the disease. Patients benefit from the fact that accurate diagnosis supports the delivery of effective pharmacotherapy and helps avoid the consequences of neuroleptic sensitivity, and from the fact that both they and their carers can be provided with fuller and more accurate information about the likely symptomatology and course of their illness. Altogether this translates into better management of patients with reduced carer burden and better clinical outcomes.