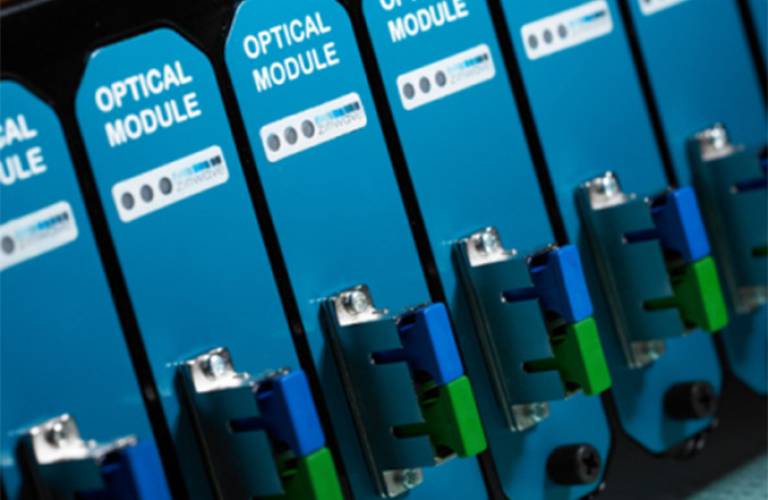 More recently, wireless signals have been transmitted over either single- or multi-mode optical fibre, though both approaches have drawbacks. The former requires expensive packaged single-mode optoelectronic devices, whilst the limited bandwidth available in the latter means that it is generally possible to carry only a single wireless service on each fibre. Product costs are particularly high where multiple wireless services must be carried, presenting a considerable barrier to the provision of widespread wireless coverage in buildings.

A research group led by Professor Alwyn Seeds (UCL Electronic & Electrical Engineering) working with Cambridge University colleagues has helped to tackle these problems by developing a method for distributing multiple wireless signals over a single multimode fibre, allowing the distribution of multiple wireless signals (such as those used in cellular and Wi-Fi services) at much lower cost. This resulted from the Fibre-Radio for In-Building Distributed Antenna Systems (FRIDAY) project, a 2001-2004 collaboration between Professor Seeds and Professors Penty and White, both of the University of Cambridge. Funded under the EPSRC-DTI LINK scheme, FRIDAY was also conducted in partnership with Agilent Technologies (UK) Ltd and Airtech Ltd.

The technology developed through FRIDAY was patented jointly by UCL and Cambridge. In 2002, Zinwave Ltd was founded by Professor Seeds and Dr David Wake (UCL) with Professors Penty and White (Cambridge) and Dr Parker (CEO of SPI Lasers). Since then, annual revenue has grown by a factor of 10 despite difficult market conditions, and by mid-2013 the company had grown to some 25 employees. Indeed, commentators have identified Zinwave as a company on a high-growth trajectory: ABI Research named Zinwave in 2012 as "part of the next generation of DAS vendors and one of the companies to watch out for as the DAS market evolves" and in 2013 it appeared among the finalists in the Red Herring Europe 100 Awards, set up to identify top private companies in the European region "positioned to grow at an explosive rate". Zinwave was acquired by McWane Inc. in February 2014.

The Zinwave distributed antenna systems (DAS) technology allows simultaneous support for any wireless standard. Full management control over this spectrum means new services can be added on demand, without deploying additional system components, and the technology can be configured in a single, dual star or mixed architecture to meet exact service needs. The advantage of all this to the customer is that a single distribution system can distribute multiple wireless services operating with different protocols and at different frequencies, rather than requiring the installation of dedicated narrowband equipment for each and every different wireless standard. As a result, the Zinwave system is more flexible, less expensive and less complex to maintain.

These advantages have helped ensure widespread take-up of the Zinwave DAS, which now provides wideband wireless coverage in shopping malls, auditoria, office buildings, casinos, convention centres, hospitals and airports in the US, Europe, the Middle East and the Asia-Pacific region. It is, for example, used in the Queen Alia international airport in Jordan, Erasmus MC and Martini Hospitals (Rotterdam and Groningen, Netherlands); a Garmin data centre in New Jersey; the 9/11 Memorial Museum in New York City; Jakarta International Airport; the Perry nuclear power plant outside Cleveland, Ohio; and the Westfield retail complex in Melbourne. In 2012 Verizon Wireless, the largest wireless operator in the USA, selected Zinwave to support the rollout of the new 4G mobile network in the USA, a significant achievement for a company of Zinwave's size and maturity. Zinwave's systems have also provided coverage for the complex wireless needs of hospitals: they were, for example, installed in the Netherlands' largest hospital complex in 2012.

The adoption of Zinwave technology delivers benefits beyond improving flexibility and reducing costs for clients. For example, it helped ensure public safety in stadiums at the UEFA Euro 2012 tournament, when it proved the only system supporting reliable coverage - and thereby reliable communications - underground. As a result, Zinwave's DAS provided the safety net for all critical radio and public safety communications.