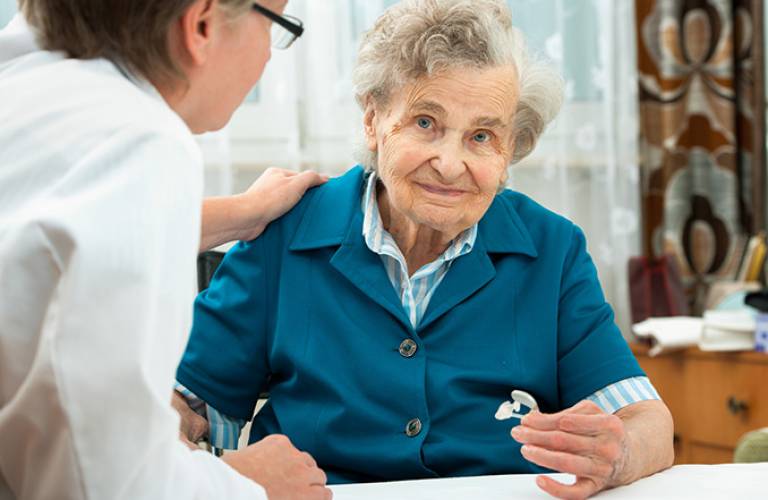 UCL research has underpinned the development of resources and services for Deaf patients who use British Sign Language, including the establishment of the first neurology clinic for this group. Resources are shared with healthcare professionals and Deaf communities around the world and the research has also influenced UK government policy.

Early identification, accessible information and 'living well with dementia' are key aims of the Government's dementia strategy. However, in the absence of cognitive assessments in British Sign Language (BSL), Deaf people do not have equal access to NHS neurology services. In conjunction with limited recognition of the nature of their impairments and poor communication between clinical staff, patients and carers, this absence of appropriate assessment tools means that neurological impairments, including dementia, are typically diagnosed late in deaf patients, or not at all, with adverse consequences for their access to medication, rehabilitation and care planning.

Work within the UCL Deafness Cognition & Language Research Centre (DCAL) has helped redress some of these imbalances in access to diagnostic assessment among BSL users with acquired neurological conditions. Building on early studies at City University to explore aphasia and apraxia in signers with stroke, the team has worked since 2005 on the production of a series of case studies of motor impairments in signers. These provided important insights including, for example, a refutation of the idea that palilalia (the delayed repetition of words or phrases) relates specifically - and exclusively - to speech. The team has also explored the manifestations of voice hallucinations in deaf people with schizophrenia, providing novel insights into the nature of subvocal thought and sensory feedback loops.

After decades of frustrating experiences with the NHS, just two appointments at a specialist deaf cognitive disorders clinic and my mother finally received a diagnosis that explains her perplexing health problems.

A survey of NHS neurological services conducted by members of the DCAL team (funded by the Wellcome Trust) found that, among Deaf people, referrals to speech and language therapy services following stroke occurred at only about 20% of the rate of referrals for hearing patients. It seems likely that those affected by other acquired neurological and neuropsychiatric conditions, such as head injury, progressive neurological diseases and schizophrenia, are subject to a similar experience. In 2010 the Centre initiated a joint project to help tackle this problem by improving early diagnosis and management among Deaf people who use BSL. Funded by the Alzheimer's Society, the project was conducted in collaboration with the University of Manchester, City University London and Royal Association for Deaf People. The UCL team focused particularly on the Older Healthy Deaf Brain, producing a profile of normal cognitive ageing within the Deaf Community.

This profile was subsequently used to develop the first ever standardised cognitive and language screening tests designed to assist diagnosis of acquired neurological impairments in sign language users, and the tests have since been made available to clinicians and researchers working with deaf people with developmental and acquired impairments. Used in conjunction with brain scans, they allow confident diagnosis of dementia and other acquired neurological impairments in Deaf people at an early stage of cognitive impairment. This faster and more accurate diagnosis allows more timely access to services which, in turn, support better health outcomes and reduced NHS and local authority care service costs.

The tests are administered at the specialist Cognitive Disorders Clinic at the National Hospital for Neurology and Neurosurgery in Queens Square in the first-ever monthly neurological clinic for deaf signers, set up in 2011 to help maximise the utility of the newly designed tests. Deaf BSL users presenting with acquired cognitive difficulties are referred to the clinic from all parts of the UK for assessment of dementia or other neurodegenerative disorders. The clinic, which is the first service of its kind anywhere in the world, allows NHS clinical services to offer assessment leading to appropriate interventions and services. As such, it represents a significant step towards reducing wider healthcare inequalities for deaf people in the UK.

This positive effect has been compounded by the use both of the UCL DCAL research and of data obtained through the clinic as a springboard for UK policy development. The team has, for example, prepared briefing documents for the government in order to allow the inclusion of Deaf people with dementia in the development of the equalities action plan with respect to the National Dementia Strategy (Deaf People with Dementia, 2010). The All Party Parliamentary Group in Deafness has also agreed to support joint proposals on health and social care developed by UCL DCAL in collaboration with Action on Hearing Loss. A joint report was launched in March 2013 to press for the creation of permanent services for this population.