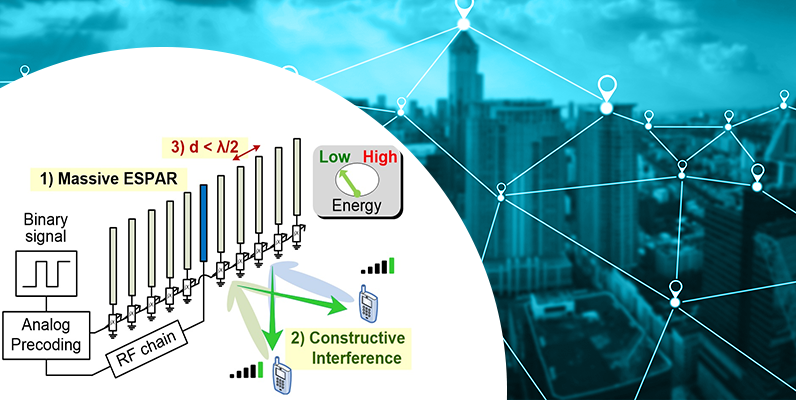 It is expected that the energy bill for cellular networks will double by 2015 and therefore there is a growing concern to reduce the associated operational expenditure (OPEX) along with the global CO2 emission in all fields of communications. 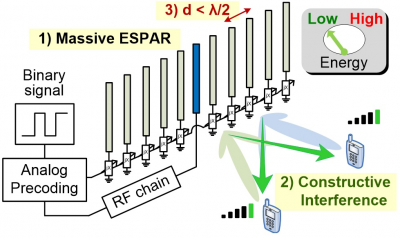 The physical layer of wireless communication is a core building block of the telecommunication system chain and the ever-increasing Quality-of-Service demands directly reflect on the performance requirements of the relevant signal processing techniques.

LSAS are envisaged for the next generations of wireless systems, to capitalise on the utilisation of multiple antennas, and deliver the transmission rates required for future communications in a power-efficient manner. LSAS involve several critical benefits:

For large numbers of antennas, pilot sequences for channel estimation have to be reused between adjacent cells. Channel State Information (CSI) provisioning becomes a significant burden and the performance of LSAS becomes limited by the resulting inter-cell interference (pilot contamination problem).

This project tackles the issue of large-scale antenna deployment by a) information theoretical analysis with realistic modelling, b) signal processing and CSI acquisition devoted to power efficiency and c) analogue-digital beamforming designs and reduced RF-chain solutions aimed at power- and cost-effective implementations.

In addition, this project re-examines the anticipated benefits of LSAS from the viewpoint of realistic deployments of the antenna arrays in limited physical space which are prone to increased correlation and coupling between the densely deployed antennas.

We aim at a thorough and pragmatic investigation of the benefits of LSAS for Green Communications, and their practical implementation solutions.