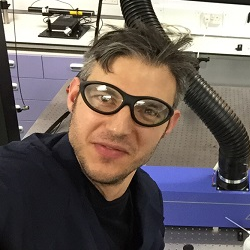 Ioannis received his Diploma in Electrical and Computer Engineering from the National Technical University of Athens and his PhD in Optical Interconnects from University College London in 2008. In 2008-2009, he worked for Sharp Laboratories of Europe, investigating sub-wavelength diffractive films fabricated by nanoimprint lithography to improve the brightness, uniformity and power consumption of liquid crystal displays. He joined CERN-European Organisation for Nuclear Research in 2009, where he worked on optical fibre links for the distribution of timing-trigger and control signals in the Large Hadron Collider. He was appointed as a Lecturer in the Electronic and Electrical Engineering Department at UCL in 2011, where he founded the Photonic Innovations Lab. He was promoted to Senior Lecturer in 2015.

Ioannis is a member of EPSRC's Early Career Forum in Advanced Manufacturing, he serves on UCL's Board of Energy Directors and he is a member of the steering committee of the Crystal Clear Collaboration and of the EU-COST Action Fast Advanced Scintillator Timing. In 2015 he was awarded an ERC starting grant to develop "smart", thermochromic windows technologies. Ioannis is very keen in translating research from the workbench to the market and has already overseen the work in his PhD being successfully commercialised.