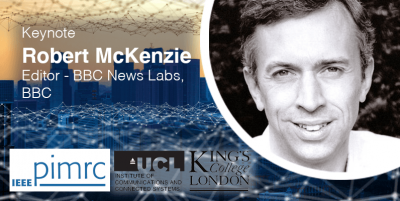 Modern citizens have instant access to virtually limitless high-quality content, but often struggle to take advantage of that to improve their everyday lives.  Could object-based media creation help us all navigate through that flood of data to find the gems which matter to us?

With over 25 years of innovation experience, Robert leads a multidisciplinary team of software engineers, technologists and journalists. News Labs acts as a bridge between News, BBC R&D and best practice in the rest of the industry, providing agile solutions to problems for journalists and new approaches to audiences.

During his time at News Labs the team have developed prototypes ranging from News Switcher, which allows journalists to change the version of the BBC website they’re viewing, to Stitch, used by hundreds of World Service journalists to reversion videos into their own language without video editing software. News Labs led the BBC’s first experiments into voice controlled devices and with bots on social media platforms.

Before joining News Labs, Robert spent nearly 25 years innovating in business, personal finance and technology journalism. He has been Editor of the BBC’s online business and technology news, run its daily radio business news and worked in the independent TV sector as a series producer. Robert has devised and launched output ranging from the business news on BBC Radio 4’s flagship Today Programme to the BBC’s online Business Live page and the award-winning Your Money Or Your Life on BBC television.