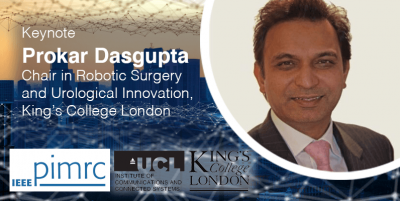 The amazing Da Vinci system, is about to face some market competition from other international companies with their own versions of next generation robots [1].

In order to challenge the current gold standard, these systems will need to be at least as good if not better. The alternative is to be significantly cheaper thus attracting a wider variety of institutions who could currently not afford the Da Vinci. Open consoles, 3D enhanced vision, lighter instruments and greater portability will be recurring themes in these new systems. There is even some renewed interest in automation that goes back to the days of John Wickham, who passed away just short of his 90th birthday (https://www.bjuinternational.com/ bjui-blog/light-years-ahead-john-wickham-1927-2017/). The STAR robot can suture bowel better than a human hand in an animal model [2]. The water jet robot (Procept Biorobotics) takes inspiration from Wickham’s PROBOT and may prove to be a viable alternative to TURP or HOLEP but without the steep learning curve [3].

The Revo-i, a Korean robot, has completed the first clinical testing in 17 patients undergoing Retzius sparing robotic assisted radical prostatectomy (RARP). It is an example of real-life reporting where even in experienced hands, three patients underwent blood transfusion and the positive margin rate was 23% [4]. One could speculate whether the approach itself or the adoption of a new robotic system reflected the results of this paper? Either way we can expect to see more such first in man reports over coming years as new robots become available.

These new machines have the potential to reduce the cost of robotic surgery to be similar to that of laparoscopy although the initial hardware outlay may still be substantial. Cambridge Medical Robotics (CMR), UK have plans to introduce competitive cost models which cover maintenance, instruments and even assistants as a comprehensive package. This may make robotics attractive to multidisciplinary expansion, amongst high volume open and laparoscopic surgeons.

The two other aspects in the world of new robots that are causing excitement are artificial intelligence (AI) and faster digital communication. The concept of AI is not new, going back to genius of Alan Turing, who with his decoding skills had a major impact on the outcome of World War II. Machine Learning (ML) is a subset of AI, using decision-making computer algorithms to grasp and respond to specific data. For example, a prostate recognition algorithm could make the machine learn whether a given image is that of a prostate cancer or not, thus reducing the variability in MRI readings by radiologists. The video recordings of surgeons performing RARP can now be converted through a “black box” into Automated Performance Metrics (APMs) and demonstrate paradoxical findings in that not all high volume surgeons are necessarily those with the best outcomes [5]. With Google moving into surgical robotics in collaboration with J&J, data capture and ML are likely to hold promise for the future.

The UK government amongst others has declared significant investment of > £1billion in AI, with a view to engaging with new talent and remaining a world leader in this emerging field. Led by Dame Wendy Hall (https://www.gov.uk/ government/publications/growing-the-artificial-intelligence-industry-in-the-uk) this ambitious project outlines a vision of appointing new researchers from the UK and overseas in all forms of AI, while maintaining the sensitivities around data trust and ethics. However, a word of caution in that AI faces difficulty with reproducibility as a result of unpublished codes in over 90% of articles written on the subject [6].

Surgery may be further democratised in coming years with the advent of low latency ultrafast 5G connectivity. The Internet of Skills could make remote robotic surgery and mentorship easily accessible, irrespective of the location of the expert surgeon [7]. The impact of these developments on patient care will be of considerable interest to the wider surgical community.

Prokar Dasgupta is internationally reputed as a clinician-scientist, educator, polymath and Editor-in-Chief of the BJUI.

He pioneered robotic surgery in Urology in the UK, and with the help of The Urology Foundation, trained and mentored several consultant surgeons and over 30 fellows both nationally and internationally. He was the first to develop image guided and 3D printed prostatectomies, indentation probes for precise localisation of tumours and is Ambassador for the KCL-Ericsson 5G Global health program in telemedicine. He was Chief Investigator for the world’s first randomised controlled trial of telerobotics and the only trial comparing open, laparoscopic and robotic cystectomy.

Twenty-five years ago, while at Queen Square, Prokar described the role of C-fibres in overactive bladders (OAB) and then developed the technique of injecting botulinum toxin-A under local anaesthesia. The “Dasgupta technique” and the first international trials of the toxin led to its licensing for OAB, improved the quality of life of millions of patients worldwide and influenced National Institute of Health and Care Excellence (NICE) Guidelines. In recognition of his achievements he received the Golden Telescope in 2006 and was appointed Professor of Robotic Surgery & Urological Innovation, KCL and Chairman of the King’s-Vattikuti Institute of Robotic Surgery.

He has made major contributions to the study of mucosal cell biology, focusing on receptor function in the bladder and targeted immunotherapy in prostate cancer. Chair of the Prostate Cancer Research Centre at KCL, he currently leads a large research team of basic scientists, engineers and clinician-scientists and has generated grant income > £30M from the MRC, Wellcome Trust, EPSRC, EU, the Guy’s and St. Thomas’ Charity and The Urology Foundation. Prokar has published 1100 articles, H-index of 65 with >800 papers, 35 book chapters, 6 books, >500 presentations, >300 invited lectures and 50 Visiting Professorships. He has been Visiting Surgeon to Maharaja Gaj Singh II of Jodhpur, India.

He is acknowledged as a leading educationalist, starting a successful BSc in Surgical Science at KCL and looking for the evidence underpinning simulation in operative surgery, human factors and patient safety. He developed the world’s first laparoscopic nephrectomy simulator, led the EU-MARS project of the development and validation of robotic surgical training and the only international randomised trial of simulation for patient benefit – the SIMULATE study.

He is a highly effective educator and communicator, editing the BJUI, doubling its impact factor to nearly 5 and achieving an Altmetric score of 1366. He led an international editorial team that revolutionised web based publishing and the responsible use of social media. He brought innovative design, artificial intelligence (AI) the new open access platform BJUI Compass to the journal.

Prokar was elected the youngest ever, Hunterian President and served on the Associated Parliamentary Committee for Surgical Services in the House of Lords. He is also known for his services to Charity, serving as a Trustee to the Prostate Cancer Research Centre and the Malcolm Coptcoat Trust. He is a mentor and advisor to the National Clinical Entrepreneurship Program. He has supported the careers of 15 UK and international academics, eight to Chairs. He has established multi-million collaborations with Universities in Europe, India, the far East and Southern China. He is surgical chair within the ambitious MedTech Hub at St. Thomas’ Hospital with a budget of £110 million.

He was awarded the Fellowship of the King’s College (FKC), King’s highest honour, membership of the Academic Association of European Urologists, the American Association of Genitourinary Surgeons and the Honorary Membership of the Urological Society of Australia and New Zealand. He is the recipient of the St. Peter’s Medal 2020, the highest recognition from British Urology.

Prokar has supported the British Association of Urological Surgeons (BAUS) in its core mission of education and research to enhance patient care. He has served on BAUS Council, Trustees, Regional Specialist Professional Advisor, Specialist Advisory Committee, Joint Committee for Surgical Training and examiner to the Intercollegiate Board. Nationally he is a member of the NICE Guidelines Panel and internationally he is a Founding member of the European Association of Urology Robotics Section (ERUS).

During the COVID-19 crisis he published a blog from Italy, China and South Korea, which was crucial to the planning of surgical services in the UK and internationally.

He is a marathon runner, a reasonable cook and an avid tennis fan.