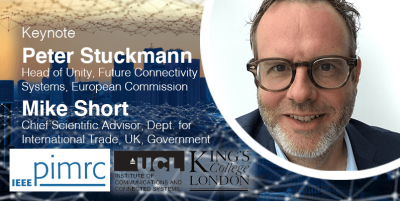 The Context of International Research

Following an introduction by Dr Mike Short CBE, Chief Scientific Advisor to the UK Government’s Department for International Trade. Concluding the session Mike and Peter will discuss research strategy and support in the sector from an international perspective. The discussion will then be opened to questions from the floor.

Peter Stuckmann is managing the Commission's policy on 5G communication systems and the related research and innovation programme.

Before his appointment as Head of Unit he was managing the office of the Director General of DG CONNECT, Roberto Viola, coordinating the Commission's digital policy initiatives. The portfolio included Digital Single Market, Broadband Policy, Telecoms, Media and Online Policy, the Copyright Reform as well as the EU ICT Research and Innovation Programme.

Between 2010 and 2014 he was Head of Sector "Spectrum Policy", was penholder of main elements of the Commission proposal on the Telecom Single Market and the Roaming regulation, and was responsible for the implementation of the EU telecom rules in Germany and Austria.

Between 2005 and 2010 he coordinated the EU R&D programme leading to the 4G mobile communications standards.

Before joining the European Commission in 2004 he has occupied several engineering and management positions in industry, academia and start-ups. He holds engineering and doctoral degrees from RWTH Aachen University, Germany.

Dr Mike Short CBE, after 30 years in telecommunications with Telefonica, joined the Department for International Trade as the department’s first Chief Scientific Adviser in December 2017.

Mike leads the science and engineering profession in the department and ensures its policy is informed by the best science, engineering and technical advice. He advises on the technical aspects of future trade deals as DIT looks to create new arrangements following Brexit, and works with the UK’s research, development and academic communities to boost scientific and engineering exports.

Mike has over 40 years’ experience in electronics and telecommunications and served as Vice President of Telefonica, the parent company of the O2 mobile phone network, for 17 years to December 2016. In this post, he managed the launch of 2G (GSM) and 3G mobile technologies in the UK and led Digital and 4G/5G research and development for Telefonica Europe. In recent years he has led the development on collaborations in areas such as smart cities, digital healthcare, cybersecurity and driverless vehicles.

His career also includes the promotion of international technical standards in mobile technology, has chaired the Global GSM Association, the UK Mobile Data Association, and been President of the Institution of Engineering and Technology (IET).

Mike also represents DIT as a Board member of Innovate UK (part of UKRI), Healthcare UK and sits on the Space Sector Council. He is on the Examining Board for UCL postgraduate Telecoms courses and is a visiting Professor at the universities of Surrey, Coventry, Leeds, Lancaster and Salford.