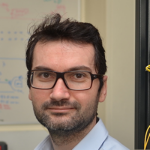 George Zervas is currently an Associate Professor of optical networked systems in the Department of Electrical and Electronic Engineering at University College London. He received his MEng degree in Electronic and Telecommunication Systems Engineering with distinction and PhD degree in optical networks from University of Essex in 2003 and 2009 respectively. Following this, George held the positions of Research Associate and subsequently Research Fellow as a member of High Performance Networks group at University of Essex. He was appointed Lecturer in 2011. He joined University of Bristol in 2012 as Lecturer and became Senior Lecturer in 2014. He also held the position of visiting Associate Professor at Keio University, Tokyo for 6 months.

He is the author and co-author of over 230 international peer-reviewed journal and conference papers including numerous prestigious post-deadline papers at ECOC/OFC as well as best paper awards. He has also given over 30 invited talks at several international conferences. George has been involved in several current and past EC and EPSRC and industrial funded projects as principal and co- investigator. He has been acting as a TPC member on international conferences such as OFC, ICC, Globecom, ONDM, ACP, among others. He is associate editor of IEEE Networking Letters and has been serving as guest associate editor on IEEE JOCN. Dr. Zervas has been involved in Internet Engineering Task Force (IETF) and Open Grid Forum (OGF) standardization fora..