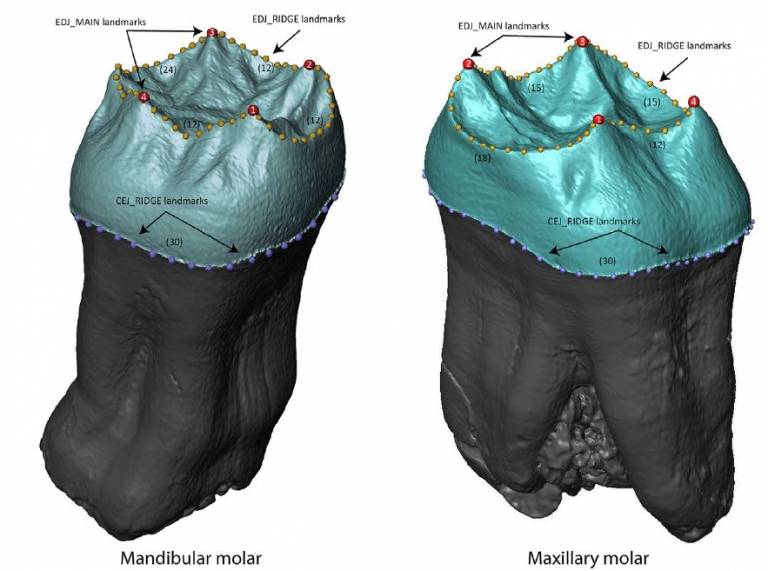 The EDJ was visualised by segmenting microtomographic scans of each molar. A geometric morphometric methodology compared the positioning of the dentine horns, the shape of the marginal ridge between the dentine horns, and the shape of the cervix. The palaeoanthropologists also examined the manifestation of non-metric traits at the EDJ including the crista obliqua, cusp 5, and post-paracone tubercle. Furthermore, the team report on additional morphological features including centrally placed dentine horn tips and twinned dentine horns. The results indicate that EDJ morphology can discriminate with a high degree of reliability between Neanderthals and recent modern humans at every molar position, and discriminate between the earlier and the later Neanderthal samples at every molar position, except for the M3 in shape space. The cervix in isolation can also discriminate between Neanderthals and recent modern humans, except at the M3 in form space, and is effective at discriminating between the earlier and the later Neanderthal samples, except at the M2/M2 in form space. In addition to demonstrating the taxonomic valence of the EDJ, the analysis reveals unique manifestations of dental traits in Neanderthals and expanded levels of trait variation that have implications for trait definitions and scoring.

The morphology of the enamel-dentine junction in Neanderthal molars: Gross morphology, non-metric traits, and temporal trends