A Middle Pleistocene hominin of Serbia: Internal structure of our early ancestor's teeth can be reliably classified into various hominin taxa

The Middle Pleistocene represents a period of critical importance in human evolution, marked by encephalisation and dental reduction, and increasing diversification of temporally and spatially distributed hominin lineages in Africa, Asia and Europe. 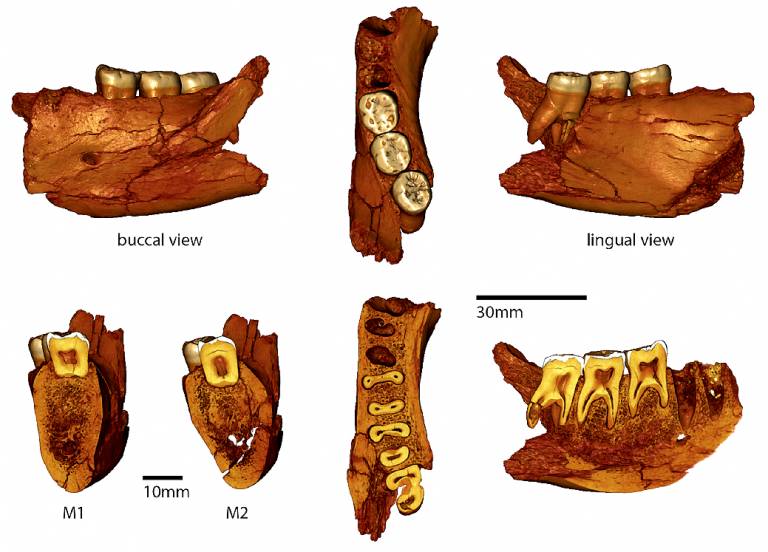 New specimens, especially from areas less well represented in the fossil record, can inform the debate on morphological changes to the skeleton and teeth and the phylogenetic course of human evolution during this period. The mandible from the cave of Mala Balanica, Serbia has recently been re-dated to at least 400 ka, and its well-preserved dentition presents an excellent opportunity to characterize molar crown morphology at this time period, and re-examine claims for a lack of Neandertal affinities in the specimen. In this study, the team of palaeoanthropologists employed microtomography to image the internal structure of the mandibular molars (focusing on the morphology of the enamel-dentine junction, or EDJ) of the BH-1 specimen and a comparative sample (n = 141) of Homo erectus sensu lato, Homo neanderthalensis, Pleistocene Homo sapiens, and recent H. sapiens. They quantitatively assess EDJ morphology using 3D geometric morphometrics and examine the expression of discrete dental traits at the dentine surface. They also compare third molar enamel thickness in BH-1 to those of H. neanderthalensis and both Pleistocene and recent H. sapiens, and document previously unreported morphology of the BH-1 premolar and molar roots. Our results highlight the reliability of the EDJ surface for classifying hominin taxa, indicate a primitive dental morphology for BH-1 molars, and confirm a general lack of derived Neandertal features for the Balanica individual. The plesiomorphic character of BH-1 is consistent with several competing models of Middle Pleistocene hominin evolution and provides an important regional and temporal example for reconstructing morphological changes in the mandible and teeth during this time period.