The 400,000 year old Ceprano fossil and implications for the evolution of Homo heidelbergensis

The Ceprano calvarium was found 20 years ago (March 1994) in southern Latium, Italy. 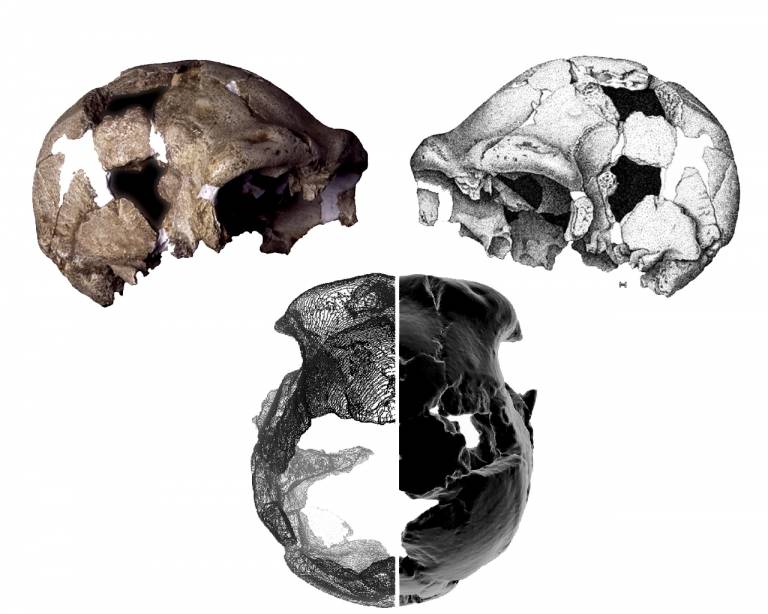 At that time, a compiled regional stratigraphy suggested an age for the layer were the cranium was found close to 800-900 ka. Thus, for more than a decade, the Italian specimen concurred to the denial of the so-called "short-chronology" for the earliest Europeans.

In addition, the archaic features of the calvarium were put in relationship with Mode 1 techno-complexes discovered in sites scattered across the Ceprano basin, albeit Acheulean assemblages are also well known in the same area. In 2001 we approached the field with a multidisciplinary project, aimed to validate the previous geo-chronological model and improve the available paleontological and archaeological records.

However, the results we obtained consistently showed that the human calvarium is more recent than previously believed, pointing to a time range close to the beginning of MIS 11, between 430 and 385 ka. Therefore, Ceprano has to be considered among the European fossil record of the Middle Pleistocene, although its peculiar morphology - a unique combination of archaic and derived features -suggests a somewhat puzzling scenario of human evolution in Europe, which could involve the occurrence of a considerable phenetic diversity during part of the Middle Pleistocene. This argument points to the time window between 1.0 and 0.5 Ma, when it is probable that a new kind of humanity emerged and diffused across Africa and Eurasia.

Although controversial when viewed as a single species, this humanity may be referred to the polymorphic and widespread taxon Homo heidelbergensis. Nevertheless, in the course of the Middle Pleistocene, different lineages of archaic humans possibly belonging to Homo heidelbergensis are recognised, suggesting the identification of geographic varieties or subspecies (i.e., potential incipient species). Given such a scenario, Ceprano represents the best candidate available at present (but also the cranial remains from Gombore II, in the Melka Kunture area, Ethiopia, ca. 850 ka, should be taken into account) to describe the cranial morphology of the still largely unknown ancestral variety of the species: i.e., Homo heidelbergensis heidelbergensis.