Montaz Marche is a recent MA History Graduate of UCL. This short article, which is based on Montaz's MA Dissertation Research Project, examines the lives of black women in eighteenth- and nineteenth-century Britain, whose experiences have too often been left out.

You can also read a great interview with the author of this article, Montaz Marche, here. We spoke to Montaz in more depth about her research, and why it's so important to look more closely at the lives of black women in British History - all the time, and especially during Black History Month.

As servants, prostitutes, activists, propertied women, mothers, wives, daughters and much more, my recent MA dissertation, 'For A Sable Venus to Move: An Analysis of Black Female Migration between Britain and the British Caribbean, 1700-1850 and the Politics of Black Femininity', explored how black women were a fixed demographic in the social landscape of 18th-19th century Britain, with varied social identities. Present and thriving they may have been, but it’s important, first and foremost, to grasp the number of women under investigation. Historians agree that black demographics throughout England in the eighteenth century ranged from 10,000 - 20,000 people. Judging by the demographic ratios seen in slave transportation, the largest movement of black people in this period, black women were outnumbered by men 2:1. Naturally, it can only be assumed that within the small population to begin with, the number of black women in Britain were even smaller, ranging from 5,000 upwards. 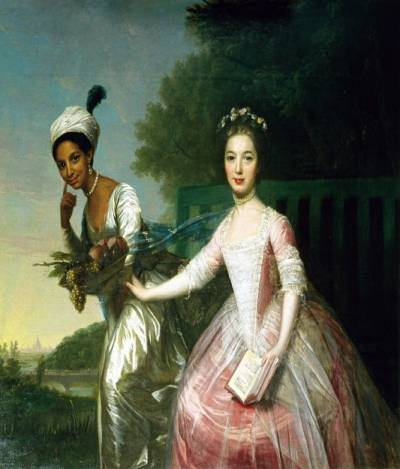 Still, in my research I uncovered over 100 black women within urban areas of London and the South East of England, in places like Chichester, Bristol, Westminster, Middlesex and Southampton. who assumed diverse roles in society, including as servants, property-owners, wives, and traders, and whose identities and knowledge often stretched the Atlantic world between the Caribbean and England. Their presence in Britain is significant first as an attribute of Britain's global dominance. The combination of British imperialism and "economic landmark" of the industrial revolution had placed Britain at the centre of a global trading network and a pinnacle western power. Concurrently, the fervent slave trade which transported an estimated 3.1 million slaves from Africa to the colonies and beyond both enabled the expansive development of the empire, whilst also complicating the experience of black people in England. Unlike the Caribbean, slavery was never codified institutionally into law in Britain. However, the meanings of race in and race relations in Britain were contradictory and in constant flux: on the one hand, the abolitionist movement of the late seventeenth and early eighteenth centuries called for the end of the transatlantic slave trade, while the courts saw continual fluctuations in the legal sphere between the legality and illegality of slavery. Yet, this context of economic prosperity and racial ambiguity provided opportunities for black women to assimilate as servants and contributors to this society, whilst reaping the benefits of their implied freedom as citizens of the mainland, the place where the 'air was too pure for a slave to breathe'.

In my research, I was interested in exploring the significance of migration, an umbrella term referring to the variety of black female movement and resettlement, from the British Caribbean to mainland Britain, to highlight how black women constructed their identities in England as 'free entities'. My research brought out the exceptional stories of Mary Prince or Black Harriot, but also lesser known black women of eighteenth century England, such as the criminal Ann Duck, a self-confessed prostitute and thief who was executed in 1744, or the story of 'Catherine', the negro servant of Ralph Paine esq. in 1744. Figures like Catherine who originated from the island of St Christopher's highlight the significance of transatlantic migration between the Caribbean and England in this period.  The differing attitudes towards blackness between the Caribbean and England, despite their unity as one empire, highlights the distinct and rare opportunities for black women in Britain in this period. For example, records of Christian burials on sanctified ground, show how nearly 20 black women from the British Caribbean became propertied married heiresses like Dido Elizabeth Belle, who came to England in the 1760s and became immortalised in a portrait by Johann Zoffany in 1778.

The reality of what it meant to be black, to be a woman, and to be British for all black women in Britain was to assimilate into British society.  Black women assimilated rather than integrated because integration implies an acceptance of black cultural practices in the British community, which did not largely occur. These cultural norms conflated with traditions of Christianity, gentility and status that British character prided itself upon. Saidiya Hartman states that only through scandal do black people overtly appear in the archives; embracing cultural norms would create precisely the scandal that was inherently dangerous to the security of black female position within the British community. Therefore, the reason why black women are so undetectable in the archives is precisely because they desired it to be so.  Black women, as social chameleons, uniquely adopted the desired characteristics of British civility, thus becoming undistinguishable from their neighbours and successfully assimilating into communities in Britain, their home. The largest record of black female activity within my research was the record of black women’s baptisms, burials and marriages in parish registers; the actions that were the epitome of common female interactions with society. Baptisms prove how black women actively engaged in a careful process of assimilation, embracing the central pillars of British community imbued within the church. They had to ensure that they were beyond the ‘foreigner’ or the ‘outsider’ stereotype whilst also ensuring a social as well as financial and physical safety, which actions such as this, that paralleled them to their British neighbours, did. Across 70 baptisms of adults and children, black women adopted a clear naming pattern, using names like Mary, Elizabeth and Ann. Yet, many black women sought to define their own assimilation. 20 runaway or Hue and Cry Advertisements indicate that poor or enslaved black woman, who laboured for particular masters, would runaway to free themselves from the confines of a life of accepted but indentured subjugation, whereas free women of nobility, such as Catherine Despard, the black wife to political radical Colonel Despard or Dido Elizabeth Belle, whose prominence stemmed from their marriages or families and who were visible public figures, adopted all the idealistic qualities of femininity in order to assimilate in to the higher social orders of women.

The lives of black women in Britain still remain a mystery. Some answers will remain lost to us, by nature of the black female presence in the archives, but some remain mysterious simply because of the uniqueness of their existence. For example, Charlotte Gardiner was a black woman executed for harrowing crowds during the Gordon Riots in 1780. But the extent of her involvement and her political motivation remain unknown because she presented no defence at her trial.  It is also unclear whether she was given an opportunity to speak and refused, or whether she was denied the opportunity to present a defence. Lacking further fragmentary context, she will go down in the record as a political protestor.

Yet if black women were an implicit but undeniably present aspect of 18th-19th century Britain, the question must be asked: why are they deemed historically 'invisible'? Black people often appear as references or as passing comments within the historical archives, demarcated as the "negro" or the "black" and little else. Still in this era of diversity, culture and celebration, my research as part of the building fascination with black British history, alongside historians like Gretchen Gerzina and Kathleen Chater, and heartfelt determination to integrate theories of black feminism and empowerment into Black British historical research, thus begins a the reimagining of black female experience.  Within the celebration of Black History Month, I wish to prove that historiographical research into black women has enough breadth, substance and vivacity to engage with the conscious process of black female self-identification and integration; a process that each and every black woman had to endure and in doing so emboldened a diversified social landscape of Britain that isn’t all that different from the modern day.

There is no denying, for a research such as this, what is required is a broad and comprehensive analysis of as many varieties of archives as possible. Such exhaustive research is difficult and unrelenting but remains important, nonetheless, for these women represent social struggles like our own today. In a country where whiteness was the norm, they were the ‘foreigners’ but still they married like their female neighbours, raised children, existing often without the families, support or amenities that we so often take for granted today. In doing so, black women built and secured lives for themselves where they weren’t simply the ‘foreigner’ they were ‘British’.  As ‘British’ woman, the ideas of ‘womanhood’ in Britain becomes so much bigger, an amalgamation of journeys beyond the pop cultured ‘big wigged’ gentility. Even more than I ever did before, I see the 18th century in a whole new light, and thus I encourage, advocate and hope to continue building a future where the image of the ‘British’ woman in the 18th-19th century encompasses every story and every shade.