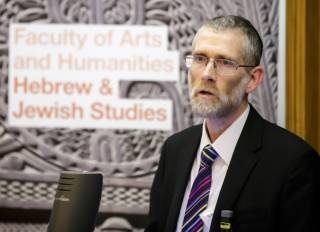 Prof. Sacha Stern specializes in ancient and medieval Jewish history, with an interest in time, calendars, and chronology. He has also researched and published articles on early rabbinic attitudes to pagans and paganism, and more generally on early rabbinic literature and history.

His latest monograph, The Jewish Calendar Controversy of 921/2 CE, is about a disagreement between the leaders of Palestine and Babylonia on how to calculate the calendar, which led the Jews across the Near East to celebrate Passover and the other festivals, through two years, on different dates. In this book, he re-edits the controversy texts preserved in the Cairo Genizah, discovers many new Genizah sources, and challenges the historical consensus about the leadership of the controversy, its outcome, and its significance in medieval Near Eastern Jewish history. This book also sheds light on the processes that eventually led to the standardization of the medieval Jewish calendar.

His earlier monographs include Calendar and Community: a history of the Jewish Calendar 2nd cent. BCE-10th cent. CE (2001), and Calendars in Antiquity (2012). In the latter, which covers the full history of calendars in ancient society, he argues that the formation of ancient calendars was mostly determined by political factors. He emphasizes the socio-political function of ancient calendars as mechanisms of social and political control, or sometimes as assertions of political independence, sub-culture, and dissidence. Calendars, he contends, are primarily an aspect of social history.

He has directed several major research projects on the Jewish calendar in the Middle Ages, including "Medieval Monographs on the Jewish Calendar" (AHRC), "The Jewish Calendar in Early Islamic Sources" (Leverhulme), and "Medieval Christian And Jewish Calendar Texts From England And Franco-Germany" (Leverhulme). In 2013-18, he was Principal Investigator of an ERC (European Research Council) Advanced Grant research project entitled Calendars in Late Antiquity and the Middle Ages: standardization and fixation, with a team of five research associates. In 2018, he led an international research team with Jonathan Ben-Dov (Haifa University) at the Israel Institute of Advanced Studies on 'The Day Unit in Antiquity and the Middle Ages'.

From September 2018, he is Principal Investigator jointly with Ronny Vollandt (LMU, Munich) of a Fritz Thyssen research project on "Qaraite and Rabbanite Calendars", with Nadia Vidro as Research Associate.

Sacha Stern is editor of the Journal of Jewish Studies (with Alison Salvesen, Oxford University) and of the Brill series Texts and Studies on Time, Astronomy, and Calendars (with Charles Burnett, the Warburg Institute).

Sacha Stern teaches BA and MA courses in ancient Jewish history and in rabbinic Judaism, most recently "Judaism and the origins of Christianity", “Introduction to the Babylonian Talmud”, and "Modern approaches to the Talmud". He also supervises doctoral students on a range of topics in ancient and medieval Jewish history and in rabbinic literature.