In 2020 the international world of Jewish Studies has lost one of its most prominent luminaries with the passing of Professor Ada Rapoport-Albert.

Ada: An unforgettable presence in the cultural history of HJS at UCL by Dr Helen Beer

Enshrined in the cultural history of our department is the annual student-staff Purim Shpil following on in the tradition of the Yiddish Purim Shpil which dates from around the 16th century. This began with my adaptations of existing Purim Shpils, but from 2008, I began writing my own.

What is now a well-tried Purim tradition in our department was born of a brief moment at a departmental Chanukah party many years ago. I happened to be standing next to Ada during the spirited singing of a Chanukah song and found myself saying to her "Gosh, you have a great voice.... maybe we should put on a Purim Shpil next year". And so it came to pass.

Every year Ada would play the part of Vashti which almost always involved the singing of a song. Each year, the question would arise - which melody should we choose? On one occasion Vashti's strident lament was sung to the melody of a Bulgarian children's song which Ada had learned from her mother. In one Purim Shpil, I was inspired by Ada travelling to and from UCL on a scooter, and so decided that all the characters in the Shpil of that year should come and go on scooters. I came to know that before embarking on an extraordinary academic career, Ada had participated in another life, one that might have led to quite a different career path.

All of this was largely unknown to me when in 2001, a brief conversation with a colleague in the HJS corridor planted the seed for a venture which surpassed any number of Purim Shpils in the scale of its ambition. A conference on Yiddish Theatre was being planned for the summer of 2002 and I was asked if we should invite some artists to perform an evening of Yiddish theatre and song. Inspired by the artistic potential of our Purim Shpils and by the heart-warming formula of creative student-staff ventures, I responded with "we don't need to import anything, we can create something ourselves".

Looking back, I cannot believe that we staged 'Jacob Jacobson', an extraordinary Yiddish play in 4 acts, written in 1930 by Aaron Zeitlin (1898-1973) in Warsaw and never previously performed. There were 3 performances held at the Bloomsbury Theatre, 25 acting roles, with the 1st Act taking place on the decks of a ship, the 2nd and 3rd Acts beneath the ocean and the final act in the Garden of Eden!

Ada played one of the major roles, that of Lucy Jacobson; a complex character and the opera singer wife of Jacob Jacobson. It is almost impossible to imagine how we all had time to combine studying, teaching, research and administrative tasks with rehearsals and without compromising standards. I can still recall Ada squeezing in rehearsals between everything else that a busy academic needs to do. The acting, singing, memorising of lines in Yiddish were all undertaken by her with the ease of the truly professional actor/singer that she was.

As a young girl, Ada wrote plays and directed her friends in their performance (in a pergola in the garden) before joining the Youth Theatre of Israel. Ada's army service took place within the Army Entertainment Troupe; its members performed at the bases of all the armed forces. Entry into the Troupe was highly competitive and seen as a stepping stone to a career in show business. Members received training in various aspects of the dramatic arts. Interestingly, this Entertainment Troupe was modelled after ENSA (Entertainments National Service Association) which was established in 1939 to provide entertainment for British armed forces personnel during the Second World War.

Having been trained as an operatic dramatic soprano within the Troupe, Ada took part in reviews (skits and songs) and a purpose-created musical over a two-year period. Professional musicians were also involved and the Troupe mostly travelled everywhere by lorry; one for the performers and one for the sets. During this period, Ada thought that upon completion of her army service, she would study drama....

For all who have known Ada, she will always be treasured as a great scholar, teacher, mentor, friend – and artist.

In the words of Robert Frost ('The Road Not Taken'):

“"Two roads diverged in a wood, and I,
I took the one less travelled by,
And that has made all the difference".

My friend Ada by Dr Tsila Ratner
Years ago when I taught courses at Leo Baeck College, Jonathan Magonet, then the principal, used to greet me smiling with ‘Ada and Zillah’, referring to the two wives of Lamech in Genesis chapter 4. Needless to say my friendship with Ada was of a very different nature, yet, ever since I moved to London in the mid-eighties, my life has been closely linked to hers.

Apart from being a close family friend, Ada had an immense influence on my professional life from the time she asked me to join the department of Hebrew and Jewish Studies at UCL in the early nineties. For all of us at the department Ada was an inspiring colleague, always maintaining the most uncompromising intellectual and academic integrity. Her unequalled broad knowledge of Jewish history, culture and languages has touched and enriched each one of us, whatever our area of specialization has been.

Her support of colleagues was invaluable. I was privileged to experience it in the two areas I valued the most: Modern Hebrew and Gender studies. Her support of Modern Hebrew teaching was instrumental in safeguarding the study of Hebrew language throughout the department’s programmes, during a time when the tide had turned against language teaching, as demands to ease departmental requirements mounted. As Head of the department she never failed to encourage me to initiate multidisciplinary courses and programmes of which gender studies was the closest to my heart and furthest away from the directly relevant teaching of the department.  Ada, sceptical at the time of feminism as an academic discipline, played a role in building the graduate programme of gender studies at UCL. By releasing me from some of my responsibilities in the department she allowed me to devote most of my time to establishing the new graduate programme. To my delight she agreed to be the guest of the programme of Women and Gender Studies at Tel Aviv University where she delivered lectures on women in the Hassidic and Messianic movements to a captivated audience.

In the coming days and years her legacy of pioneering research will be studied and discussed at length. I cherish the more personal experiences we shared: loud debates on politics Israeli-style, her beautiful drawings on hand-made small humorous birthday cards (yes, she could also draw!), introducing Ada to Louise Bourgeoise at Tate Modern, our first visit to Auschwitz holding hands in silence, singing the Hebrew lyrics along with the cast of My Fair Lady in a London matinee (yes, she could also sing!), sharing memories of childhood in Israel around dinner tables.

If I were to choose a defining adjective to describe her I would choose ‘big’: boundless generosity towards which we all gravitated, expansive talents, mesmerising academic prowess, insatiable curiosity and above all a big and welcoming smile that made each one of us feel so special.

As for now I, like many of her friends, colleagues and students struggle to come to terms with her loss. The physical absence of such a bigger than life personality is startling, echoing the poem by Bialik: “There was a (man) woman – and look, (he) she is no more. / (He) She died before her time”.

Like many of my former colleagues and friends in the department, I have known Ada for many years (about 30). Firstly as a student, then as part of the HJS admin team.

I was a mature student with small children when I started at UCL. Ada was very supportive  throughout my degree. I took several of her courses which were brilliant; hard work but very interesting and challenging. Her copious comments in pencil in the margins of essays were legendary (and really helpful – much preferred to one sentence comments like “you could expand this”).

As well as being a world-renowned academic, Ada wore many administrative hats (albeit somewhat reluctantly but understandably - a common complaint from academics being  the never-ending bureaucracy which encroaches on their academic work). Over the years Ada was Admissions Tutor (she interviewed me), Departmental Tutor, Chair of Board of Examiners, Year Abroad Tutor, Graduate Tutor, Undergraduate Tutor, Chief RAE contact and Head of Department - and I’m sure I have forgotten half a dozen other responsibilities!

What stays with me was Ada’s unstinting support of everything we did. She always backed us up, which was greatly appreciated and reassuring during some times stressful situations. She was supportive, both on a professional and personal level.

Ada was passionate and fiery - our corridor on the third floor of Foster Court was noisy and full of life, and you certainly knew when Ada was in. I fondly remember our many disagreements, sitting next to each other in her office by her computer, the big silver dog bowl full of cigarette ends (before smoking was banned…) with Ada wanting to send another forceful email and me saying she couldn’t, even though she was right. I think we made a good team and our disagreements never impacted on the respect and friendship we had for each other.

Ada will be sorely missed but, as François said to me, she will also be very fondly remembered… 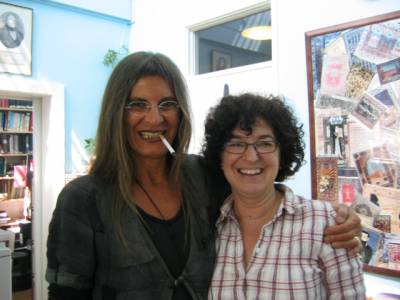 More videos of Ada's lectures are available on YouTube