The international world of Jewish Studies has lost one of its most prominent luminaries, with the passing of Professor Ada Rapoport-Albert. 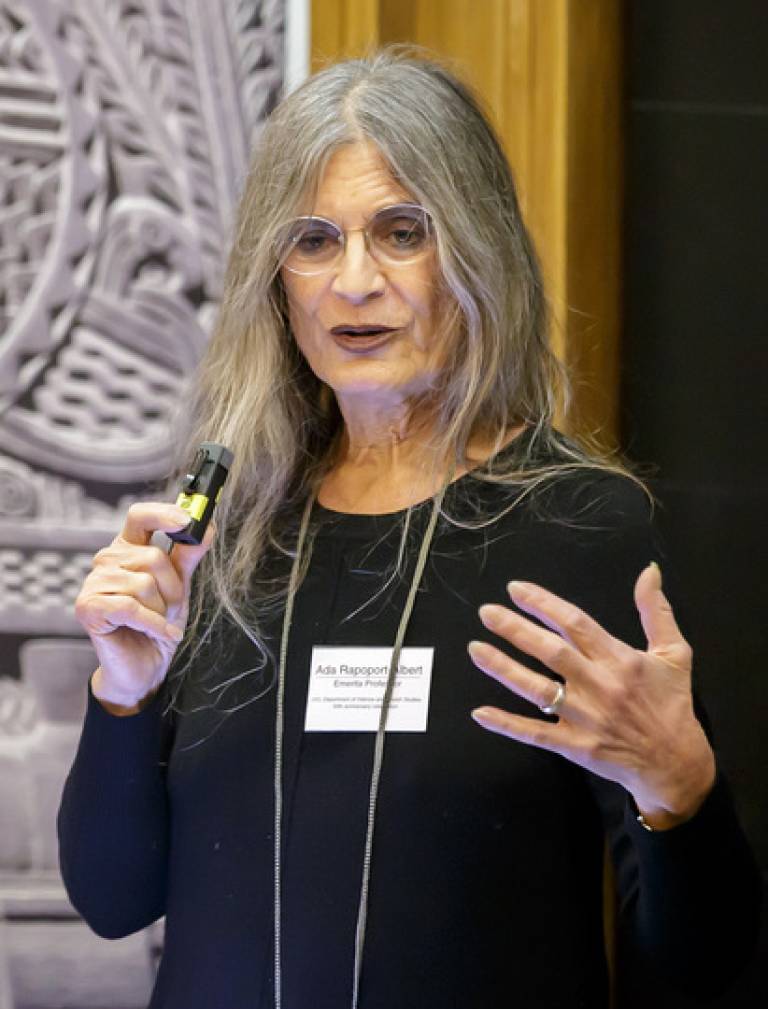 The international world of Jewish Studies has lost one of its most prominent luminaries, with the passing of Professor Ada Rapoport-Albert. This is a particular loss to the Department of Hebrew and Jewish Studies at UCL, with which she was closely associated for over half a century, and which she headed for ten years. Her passing is also a loss to her many friends, because, due to her personal charisma, a significant proportion of her colleagues and students over the past fifty years think of her as a specially close friend, as indeed she was.  Within less than a day of her passing an advert was placed in Ha’aretz which read: ‘Our beloved Prof. Ada Rapoport-Albert is mourned by her friends’, followed by a list of over thirty well-known names in the academe in Israel and the USA.

Ada (as she was known by all) was born in Tel Aviv in 1945. Her mother Alma was a Bulgarian pianist, trained in Vienna, who had reached Mandate Palestine in 1939. Her father Zalman Rapoport, from Berdichev, reached Ottoman Palestine in 1914 as a young child.  A friend of the Rapoport family was Shmuel Abba Horodezky (1871-1957), descendant of famous hasidic leaders and scholar of Hasidism and Kabbalah.  This can be seen as Ada’s first visible link with her future vocation.

Her father was a qualified agronomist and the family moved to Brussels where he represented Israeli agricultural interests to the European Economic Community. After Israeli military service, Ada decided to move to London in 1965 to pursue a course in Jewish History at UCL.  After her 1st class honoursBA, she went on to study for a PhD about Bratslav Hasidism, under Professor Joseph G. Weiss, a former student of Gershom Scholem. It was at this point that I met her, having joined the department as an undergraduate, and also having a strong interest in Bratslav. She would eventually become a close friend of my wife and me, and of our children.

Weiss was a deeply spiritual figure, fascinated by the radical and complex Rabbi Nahman of Bratslav (d.1810) and his focus on paradox in Judaism.  After the tragic passing of Weiss in 1969, Ada continued and gained her PhD with Professor Chimen Abramsky as supervisor.  Her earliest published articles were about Bratslav Hasidism.

In her long career as a leading scholar of Hasidism, Ada taught first at the Oriental Institute in Oxford. Among the institutions where she held visiting teaching positions and research fellowships were the Harvard Divinity School, Stanford University, the Institute of Advanced Judaic Studies at the University of Pennsylvania, and the Ludwig-Maximilians University in Munich.  But her longest and most prominent institutional role was in the Department of Hebrew and Jewish Studies at UCL, as Lecturer, then Reader, Professor and Head of the Department (the latter, from 2002 till 2012, when she retired).  Throughout her time working in the Department, whether as lecturer or as Head, she had a crucial role in establishing its positive, warm, accepting atmosphere, which continues under her successor as Head, Professor Sacha Stern.  Ada was much respected and loved by her colleagues and her students, especially her many doctoral students, although these all had to face her copious sharp comments on their essays and draft chapters, often written in pencil.

Ada’s editorial (and managerial) skills came to the fore in the several volumes she edited, generally with colleagues.  These volumes often can be seen as expressing her kindness, love for one’s fellow.  Thus together with Steve Zipperstein she produced Jewish History Essays in Honour of ChimenAbramsky (1998), a warmly felt tribute to this remarkable scholar who had been her lecturer, PhD supervisor, and Head of Department.  When Michael Weitzman, Reader in Jewish Studies in the Department tragically passed away in 1998, aged only 51, Ada helped edit, with Gillian Greenberg, two volumes in his memory.  There were several other such works.  Shortly before she passed away she co-edited, together with Professor Marcin Wodziński, a volume of essays on the religious life of eastern European Jewry, to be published as a volume 33 of Polin. Studies in Polish Jewry.

Ada’s chief contributions to scholarship, in terms of her own research and writing, were in the fields of Hasidism in the 18th-20th centuries and the earlier Sabbatean movement.  She was interested in the early structure of the hasidicmovement, and in the role of gender in Jewish mysticism.  A seminal article (in the Abramsky volume) revised the idea presented by her grandfather’s friend Shmuel Abba Horodezky  that ‘women enjoyed complete equality in the Hasidic movement’ which, he believed, was illustrated by the career of ‘the Maid of Ludmir’ who was described as a female hasidic Rebbe.  Ada claimed that the ‘Maid’ was discounted in her role as Rebbe by prominent male hasidicleaders of the time.

Later, she wrote two significant articles on the role of women in Habad, showing how each of the last three Lubavitcher Rebbes made radical steps concerning women, first creating a female constituency in the community, then considering them hasidim in their own right and eventually, she claimed, granting them the mystical status of ‘Tsaddik’.  All these articles are included in her volume Hasidic Studies, Essays in History and Gender (Littman Library, 2018).

She also explored more radical aspects of gender and mysticism in her book Women and the Messianic Heresy of Sabbatai Zevi, 1666-1816 (Littman Library, 2011, translated from the Hebrew by Deborah Greniman), which focused on the Sabbatean combination of sexual liberation of women and granting them the role of ‘prophets’.

Apart from her own research, Ada drew contrasting people together and generously opened doors.  A conference on Hasidism which she organised at UCL in 1988 (its proceedings were published in her Hasidism Reappraised, Littman Library, 1996) brought together many of the leading ‘secular’ scholars of the movement together with ‘haredi’ researchers such as Yehoshua Mondshine, Daniel Meijers and the writer of these lines.  Ada transcended such distinctions, and helped others to transcend them as well.

Ada’s activities included her time as President of the British Association of Jewish Studies, and her lengthy funded project, housed at the HJS Department, on the language of the Zohar.  She also served, with great distinction, as president of the Jewish Historical Society of England, graciously accepting the position after the untimely death of Professor John Klier in 2007.

Ada frequently participated  in the public events organised by the Institute of Jewish Studies at UCL, and was involved in several ways with the now burgeoning realm of Jewish Studies in contemporary Poland.  Hence it is fitting that her extensive personal library of hasidic works will be housed at the University of Wroclaw.  Also significant were her contacts with figures in the contemporary Hasidic world, such as Rabbi Shmuel Lew, whom she admired.

Ada’s final public act in the academe was the organising of a conference at UCL in September 2019, commemorating fifty years since the passing of her old mentor and PhD supervisor, Joseph G. Weiss, dedicated to his thought, life and teachings.  Again, an act of love.

A volume of essays planned to be in her honour, edited by colleagues and former students, is shortly to be published. Now, it will be in her memory.  Academic memorial events are being planned, in this country and in Israel.

Sadly, cancer cut short her life. She had an amicable relationship with her former husband Bill Albert, who lectured on economics at the University of East Anglia and later became a popular author.  They have a daughter Maya, and a son Saul, who with his wife Selene has a baby boy Yshai, a source of much joy for Ada.  May her memory be for a blessing.

Professor Ada Rapoport-Albert was the life and soul of the Department, where she was student, academic, and then Head of Department, for over half a century. Her charismatic and inspiring leadership raised the Department to its current internationally high standing. She was expert in all areas of Jewish Studies, and made paradigm-shifting contributions to the study of Jewish mysticism, Sabbateanism, and Hasidism. She was a well-known, highly popular figure across the whole of UCL, and will be sorely missed.