Ithiel the Cushite of Venice 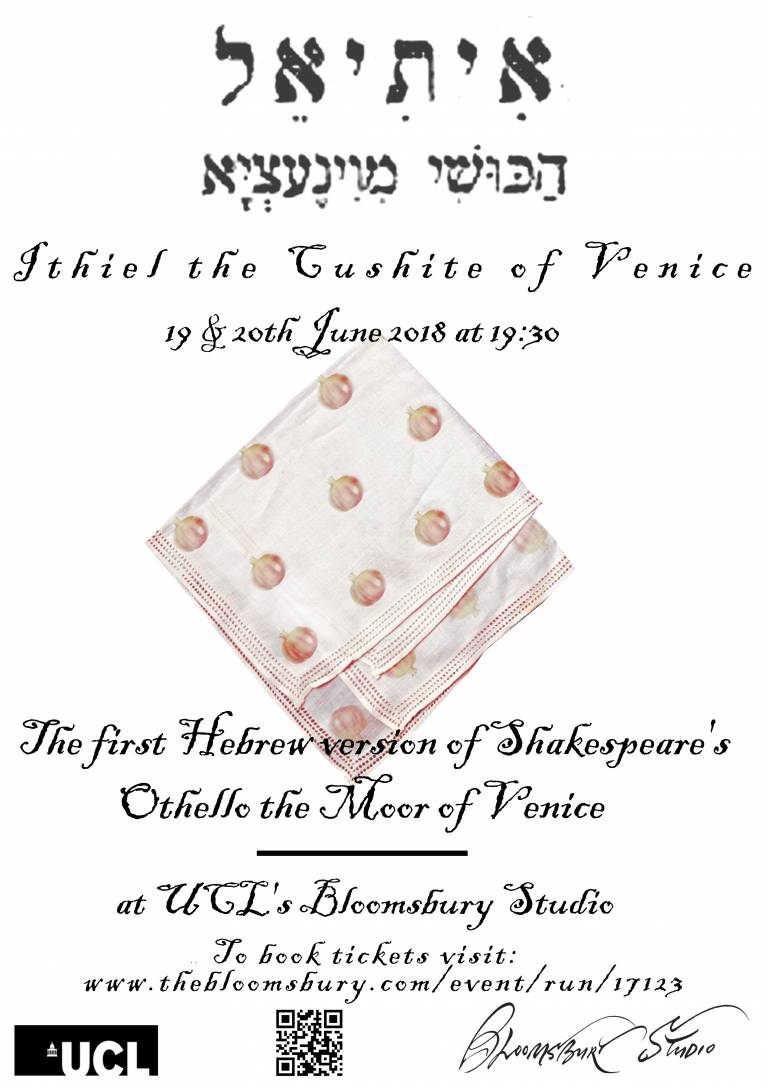 Ithiel aka Othello in the Bloomsbury Theatre

Under the supervision and direction of Lily and Paul Moore, the students have rescued from obscurity and brought to life the first Hebrew translation of the play. Unlike subsequent translations of the play performed in Israeli theatres, Salkinson’s version was staged in its entirety only once, in 1936, without much success due to its language. Indeed, even to Israelis Salkinson’s language sounds archaic, cumbersome and would no doubt be incomprehensible to many theatre goers. All the more so when the cast and audience are not native speakers of Hebrew. How the students/actors mastered their roles, consisting at times of large volume of text, was nothing short of a miracle, not to mention their dedication and hard work.

From the very beginning it was clear that Salkinson had not merely transferred the play to another language, but actually converted it to the Jewish world of biblical and medieval Hebrew. This was apparent already in the Hebraism of the characters’ names in the cast list: Ithiel for Othello, Cushite for Moor, Doeg for Iago, Asenath for Desdemona and so on. The opening scene on stage with Ithiel and Aesnath getting married under a chuppah, made the Judaification of Salkinson’s translation inescapable. Translating Salkinson’s Hebrew into English help to maintain this notion, emphasising even to the non-speakers of Hebrew in the audience the radical relocation of the play.

Throughout the production, the conventional interpretations of prejudice, racism, desire and revenge which we immediately associate with Othello have been turned upside down. Once Othello becomes the biblical Ithiel, an Israelite albeit from the land of ‘Cush’ (which at the time was not necessarily a derogatory term), he is no longer the Moor, the black and marginalised outsider. The Shakespearean social hierarchy and the psychological implications that led to Othello’s demise made way to a different positioning, whereby Ithiel/Othello is not the victim of racist prejudice anymore. He is a member of the ruling majority and therefore his raging jealousy has no mitigating circumstances. When Desdemona becomes Aesnath, named after the daughter of Pharaoh’s priest given to Joseph for a wife, she loses her original elitist status. She and not Ithiel is the newcomer, therefore inferior in the social hierarchy, and her virtuous innocence in the original play might be taken to be the resignation of the marginalized to a fate of abuse. From this perspective, Ithiel the Cushite of Venice is an exploration of the fragility and insecurity of dominant political power that leads to abuse.

One instance in particular exemplified this shift for me. In the third act, bewildered by Othello’s change of heart, Desdemona tells Cassio in the original play: “My lord is not my lord; nor should I know him []”. Asenath on the other hand tells Chesed/.Cassio: “He is no longer my husband. If the Cushite were to change his skin as he has changed his heart []”, alluding to Jeremiah 13:23: “Can an Ethiopian change his skin or a leopard its spots? Neither can you do good who are accustomed to doing evil”. Voiced by Asenath, a newcomer to the Israelite society through marriage, the biblical allusion vilifies the misuse of power by any dominant authority.  Furthermore, the allusion to Jeremiah claims that this abuse, “doing evil”, is inherent to any power system be it Christian, Jewish, Moor or Black.

Was Salkinson’s translation of Othello meant to be a kind of warning, saying that no cultural/religious group is immune to the evil of power? Most probably not. However, this rare production has revived Salkinson’s Hebrew version of Othello not only as a curiosity in the historical development of Modern Hebrew. It has shown the potential of translation to throw a new light on what we take for granted and to provoke a revision of conventions. As Natan Alterman, one of the greatest Modern Hebrew poets and translator of Shakespeare, has stated: “Also an old image has a moment of birth”.

I hope Lily and her devoted team will continue with their labour of love.