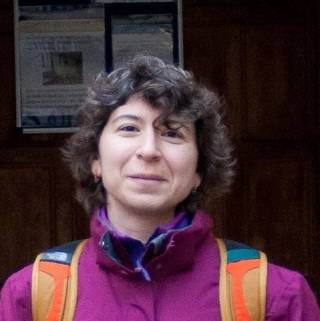 Dr. Nadia Vidro is a Senior Research Fellow in the project “Saadya Gaon's Works on the Jewish Calendar: Near Eastern Sources and Transmission to the West”, funded by the Fritz Thyssen Foundation. She holds a PhD in Hebrew Studies from Cambridge (2009), an MA in Jewish Studies (major), Islamic Studies (minor) and General Linguistics (minor) from the University of Cologne (2004) and a Diploma in Bio-physics from the Saratov State University, Russia (2000).

Dr. Nadia Vidro’s primary research interests are Hebrew manuscripts and Jewish intellectual history. Her research at UCL focuses on the history of the Jewish calendar. In her current project, “Saadya Gaon's Works on the Jewish Calendar: Near Eastern Sources and Transmission to the West” funded by the Fritz Thyssen Foundation and led by Prof. Sacha Stern (UCL) and Prof. Ronny Vollandt (LMU), Dr. Vidro studies the calendar writings of Saadya Gaon. Saadya Gaon was the preeminent scholar and leader of rabbinic Jews in the early tenth century, a period, when the calendar and dates of Jewish festivals were subject to major disagreements and conflicts in the Near East. In this project, Nadia reconstructs and edits the full corpus of Saadyanic calendar writings, and analyses this corpus against the background of earlier calendar literature and the diffusion of the Rabbanite calendar in later medieval Europe.

In her previous project “Qaraite and Rabbanite calendars: Origins, Interaction, and Polemic”, funded by the Fritz Thyssen Foundation, Nadia investigated the origins of the Qaraite calendar, and studied the calendar disagreements between Qaraites and Rabbanites.

Dr. Vidro’s additional research interest is the history of grammar, including the Qaraite tradition of Biblical Hebrew grammar and the transmission of grammatical knowledge between the Jewish and the Muslim cultures.