Spotlights on our international progress with CPAPs

Teams across the world are manufacturing the UCL-Ventura CPAP breathing aid to fight coronavirus in their country. UCL-Venturas are now being used in 29 countries.

In Baja California, Mexico, a group of more than 30 businesses is manufacturing UCL-Ventura CPAPs for their state. Led by Luciano Arguello, owner of Mold Craft Solutions, the Baja Ventura Breathing team have produced more than 100 devices for local hospitals.

Watch our video interview with Luciano 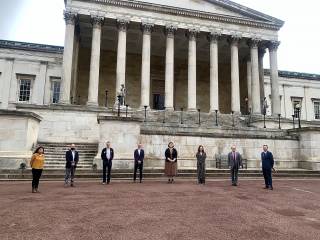 Image above: we are visited at UCL by a team from Ecuador including the Ecuadorian Minister of Health

A team Ecuadorian researchers, based in the country and overseas, are working to create CPAPs in their country with limited manufacturing resources. The group has close ties to UCL, thanks to Dr Sara Adela Abad Guamán, who works in the Mechanical Engineering department.

Read more about the Ecuadorian consortium

Australian racing car manufacturing rivals Walkinshaw Automotive Group and Premcar united to produce UCL-Ventura CPAPs. The group received approval from the Therapeutic Goods Administration in June to use the devices in Australian hospitals.

UCL Ventura devices in use in five Palestinian hospitals

Our UCL team has been working with the non-profit International Medical Education Trust (IMET2000), Medical Aid for Palestinians (MAP) and other partners to bring UCL Ventura CPAP devices to Palestine where they are vitally needed to support the fight against COVID-19. 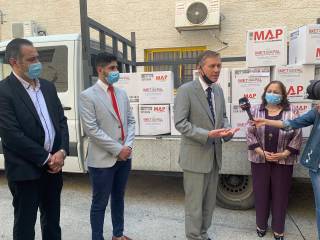 Read more about progress in Palestine

Over 500 CPAP devices manufactured for use in Pakistan

The Alsons Group in Pakistan have successfully gained in-country regulatory approval for their version of the UCL Ventura CPAP device and are mass manufacturing devices for use in hospitals. Find out more in our spotlight feature on the Alsons Group.

Regulatory approval and manufacture in India

A team at SecureMeters in India have secured in-country regulatory approval for their UCL Ventura-based CPAP devices. They have successfully manufactured 40 CPAP devices so far, and these are being used in clinical trials in three hospitals across India.

Read more about progress in India 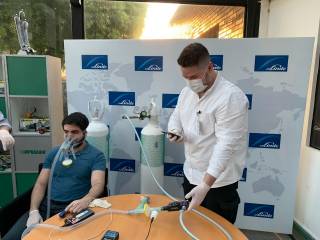 "What UCL has achieved in the UK and around the world is what humanity is all about – helping each other without expecting anything in return. Together, we can create a real impact across the globe" - UCL Ventura's collaborator Niels Birbaumer, Smart City Tech is manufacturing CPAPs in Paraguay 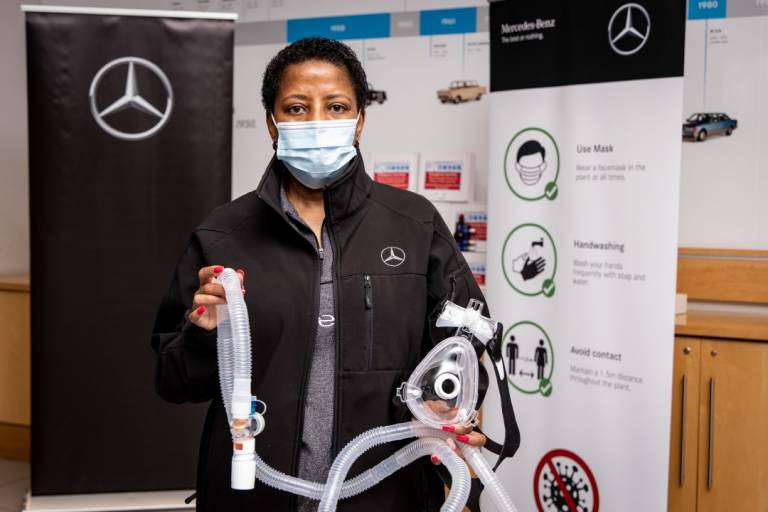 Commenting on the donation, Andreas Engling, CEO of MBSA and Executive Director Manufacturing said: “The provision of the CPAP respirator devices is timely. These devices will support and better equip public hospitals and patients to deal with future surges of COVID-19. A priority for Mercedes-Benz South Africa during the pandemic has been the preservation of the health and safety of our employees and the communities in which we operate. As a socially responsible corporate citizen, the donation of the cutting-edge life-saving medical devices demonstrates our determination to work with all social partners to combat COVID-19 in South Africa.”

The CPAP devices donated to the National Department of Health have been approved by the South African Health Products Regulatory Authority (SAHPRA). Required training on how to use the CPAP respiratory devices will be provided to all beneficiary healthcare front line staff in national, provincial tertiary, regional and district hospitals across the Eastern Cape, Gauteng, Free State, KwaZulu-Natal, Mpumalanga, Northern Cape, Limpopo and North West.

Over 1,000 UCL-Venturas sent to India and Nepal 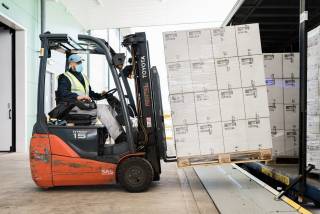 We have sent a total of 1,160 breathing aids to India and 130 to Nepal to support the countries’ fight against a Covid-19 surge.

The UCL-Ventura CPAP breathing aid was first sent to India in April as part of a UK Government shipment of 600 devices including ventilators and oxygen concentrators, to be delivered to hospitals in the worst hit parts of the country.

Since then, holistic supply partner G-TEM has packaged and transported hundreds of devices from their warehouse in Gloucestershire, often within just 24 hours, to be flown to Delhi and Nepal.

Professor Rebecca Shipley (UCL Institute of Healthcare Engineering) said: “The UCL-Ventura team developed the breathing aid to help those in the most need, and I’m so pleased we are able to include it in emergency aid shipments to ensure hospitals in India and Nepal have access to it." 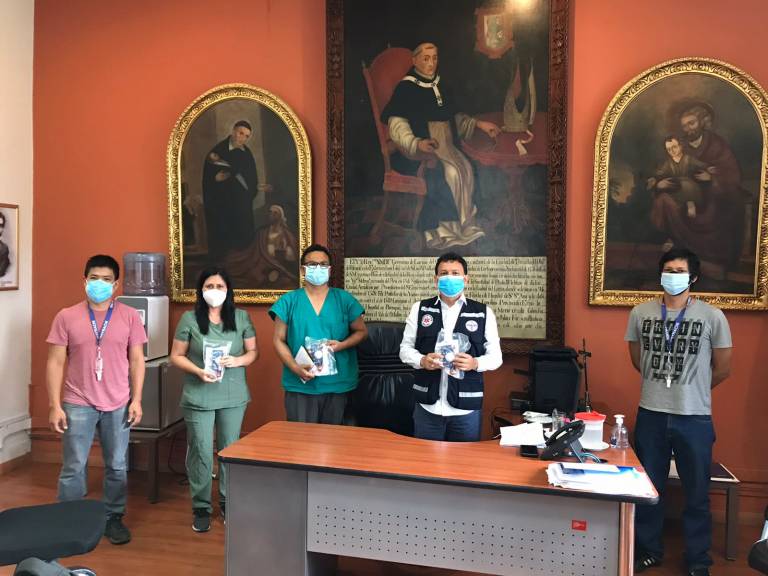 The trio have renamed the UCL-Ventura the Wayrachi, which means ‘that which gives air’ in Quechuan, an indigenous Peruvian language. As of April 2021, they have manufactured 750 Wayrachi devices, which are being used in 60 hospitals.

Find out more about the Wayrachi team 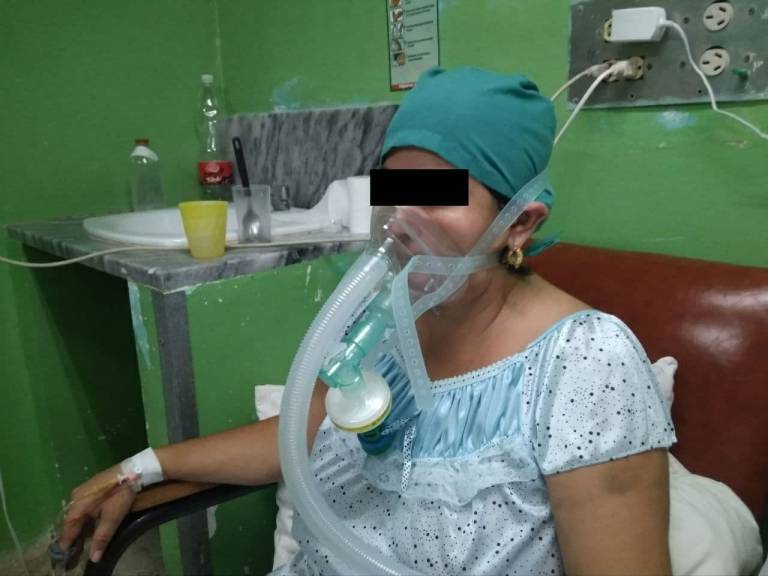 A team of Cuban researchers has successfully manufactured non-invasive breathing devices for COVID-19 patients, based on the Ventura designs.

The team of researchers from the Centro de Neurociencias de Cuba or (CNEURO) downloaded the open-source designs for the breathing aids from the UCL website.

The CPAP machines – which the team have named VENTIPAP – were trialled in four local hospitals: Luis Díaz Soto, Julio Trigo, Miguel Enriquez and Enrique Cabrera Hospitals. Following positive results, the devices were approved for use on patients by the Control de Equipos y Dispositivos Médicos (CECMED), the Cuban regulatory body for medical devices.

Learn more about the VENTIPAP

Listen to Professor Rebecca Shipley, one of the UCL-Ventura team members, describe how the UCL-Ventura CPAP came to be and its global impact in this podcast from the Global Disability Innovation Hub.