Imaging and AI gives clues to the spreading of brain disease

Neurological diseases destroy cells and cause the brain to shrink over time. 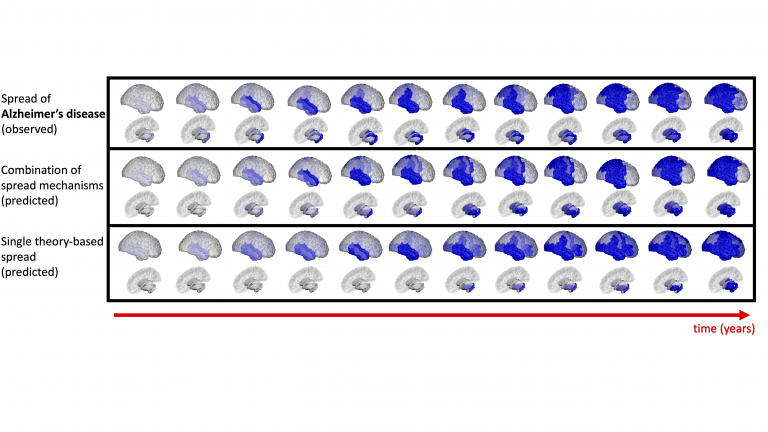 The same happens in normal ageing, but the pattern of how this shrinkage spreads differs among conditions such as Alzheimer’s disease, other dementias, and multiple sclerosis — and all differ from patterns observed in normal ageing.

Researchers at UCL have developed new computational models that link this spreading of neurodegeneration to the wiring pattern of the brain — how different areas are connected to one another. Their models reveal how the processes that cause the spread varyamong neurological conditions. Understanding the nature of this shrinkage is key to tackling the challenge of neurological conditions such as dementia and multiple sclerosis.

Some theories of neurodegeneration propose that toxic proteins appear in certain “epicentres” and spread along white matter fibres — the brain’s wiring and communication system — to gradually “infect” other areas. If the brain was the London Underground network, and an epicentre Green Park, the first regions to be infected would be those in closest proximity to the epicentre like Piccadilly, Hyde Park or Oxford Circus, well before those further away. Others suggest that highly connected areas are most vulnerable to pathology simply because of wear-and-tear: busiest stations, like King’s Cross or Bank. Others suggest the opposite: the least connected areas are most vulnerable due to least usage (“use it or lose it”) — end-of-line stations, like Uxbridge and Stanmore. Neuroimaging provides evidence for and against these different theories by observing patterns of neurodegeneration and how they vary over time.

There are two key insights from this new paper. First is that combinations of spread mechanisms explain observations much better than any single theory. This result strongly suggests that multiple mechanisms are at play, and none can be disregarded without losing information. The second key insight from the paper is that different neurodegenerative conditions employ quite different spreading mechanisms. This is important in the design of future treatments for devastating diseases like Alzheimer’s disease, as well as for early detection and classification of disease.

In the paper, UCL researchers usedlarge medical datasets from three neurological conditions: Alzheimer’s disease, progressive multiple sclerosis, and normal ageing. They showed that very different combinations of mechanisms explain each condition; for example, the most prominent mechanism in AD appears to be propagation of toxic proteins along nerve fibres, although “wear and tear” is also important. These findings may open new avenues to inspire future drug development, particularly in Alzheimer’s disease.

The authors propose a new and unique tool for exploiting large medical datasets in exposing mechanisms of brain shrinkage. Understanding how different neurological conditions evolve and which mechanisms drive this evolution is an important step towards meeting the societal challenges posed by the ageing population globally.