Over the coming years, the UCL Grand Challenge of Sustainable Cities is going to prioritise work under a set of Priority Themes, as seen below, as well as leading on one pan-Grand Challenge Mega Theme - Transformative Cities. 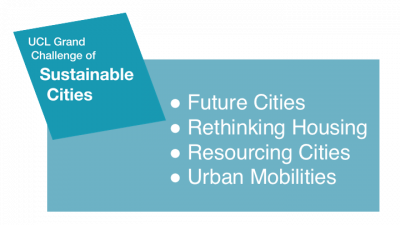 What is the future of urban development? How can different models of local governance help or hinder the 'right kind' of development? And what will the cities of the future look like?

Our work examining and understanding the housing crisis in the UK includes events, articles and academic discussions. We will continue to contribute to this debate by bringing together world-leading academics at UCL, from architecture and engineering, to planning and economics.

This mega-theme examines the role that cities and networks of cities can play in transforming the future. It also looks at the ways in which cities will be transformed in the future. Cities have an increasingly important role to play in modern society, with an increasing proportion of the world's population living in urban areas, and an ever growing number of megacities.

The first major project under the banner of Transformative Cities was a response to UN Habitat III, it is a collaboration with Nature to convene a panel of international experts to study the interface between urban science and urban policy.

A circular city is based on circular, localised, resource flows. A circular approach to managing land, water, energy and materials has the potential to significantly reduce resource consumption and CO2 emissions.

Taking this approach relies on research to find the adaptability and flexibility in the built environment and resource flows. It also requires the support of city policies, that could, for instance, increase the re-use and recycling of materials, and make renewable energy a larger part of the energy mix.

The aim of Resourcing Cities is to support the development of urban living environments that adapt to people's needs throughout the life-cycle, whilst evolving with cultural, demographic, economic and environmental changes.

Our new Grand Challenges Magazine showcases the latest news, research projects and analysis from the programme, along with many opportunities for you to get involved.

November 2017: Events and updates from across the Grand Challenges

Find out more about the current plans for the Grand Challenge of Sustainable Cities.