UCL Grand Challenges recently announced the awards of a call to address the theme of 'European Voices'. 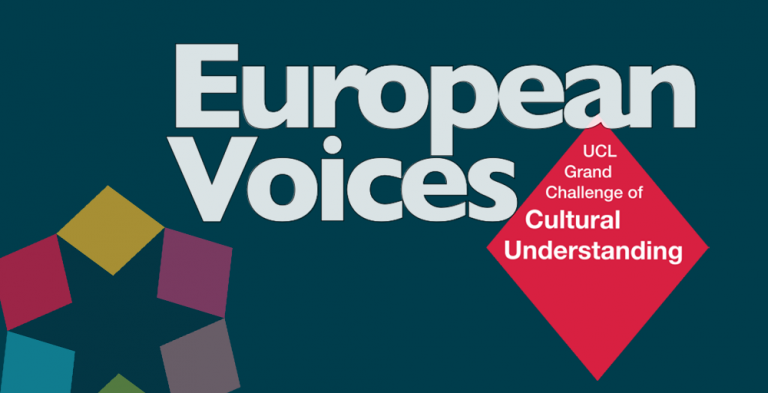 As UCL institutionally determines how best to respond to Brexit, UCL’s Grand Challenge of Cultural Understanding seeks to ensure cultural interaction and diversity flourishes. GCCU will therefore deliver the 2019-20 special initiative: European Voices. The initiative aims to support research into the individual voices and multicultural perspectives included under the term ‘European’ at a time when, in many respects, borders matter less and less and yet nationality is more central to political debate than ever. As part of this, GCCU recently awarded support to three cross-disciplinary initiatives.

Through a series of public events with internationally distinguished writers, this project will celebrate the work of writers who give voice to the frightening materiality of climate change. The project will explore how bringing together twenty-first century environmental politics, creative writing, and critical research in the arts and humanities opens up a space to discuss European futures in new ways. Each public event will be accompanied by small-group workshops with researchers from across UCL and beyond, and interviews with each writer which will be made available as videocasts.

UCL in Europe: A Pilot Event

Organised around a major pilot event in Paris, the project aims for UCL to retain a positive bond with Europe, intellectually and institutionally, by 'talking Europe in Europe'. The initiative will cover both academic and networking elements involving former and current students, scholars, and institutional stakeholders. Featuring a keynote lecture on the crisis of liberal demoncracy and rise of populism; interdisciplinary panel discussions; and a Brexit seminar on Article 50 and UCL's insitutional mitigation work; the initiative gives UCL's European academics an opportunity to discuss what it means to be working on European issues in the UK, and our European alumni to examine how European they feel UCL to be.

National Parliament Buildings: The Architecture of Power, Accountability and Democracy in Europe

Parliament buildings are the symbols and instruments of political life. They shape political culture and the space where the government is held to account. Their architecture, history, and rituals say a lot about norms of governance and behaviour. With the wide adoption of television coverage and social media, these buildings project political culture outward, changing the scale and speed of communication between citizens and the parliament. This project will use historical research, computer modelling, ethnography, documentary film and experimental performance to ask 'How do parliament buildings shape the nations' concept of their political selves?', 'How do spaces, ceremonies, and insignia shape identity, democracy and citizen participation?', and 'Can performance experiments with parliament settings help re-imagine the space of political debate in contemporary societies?'.